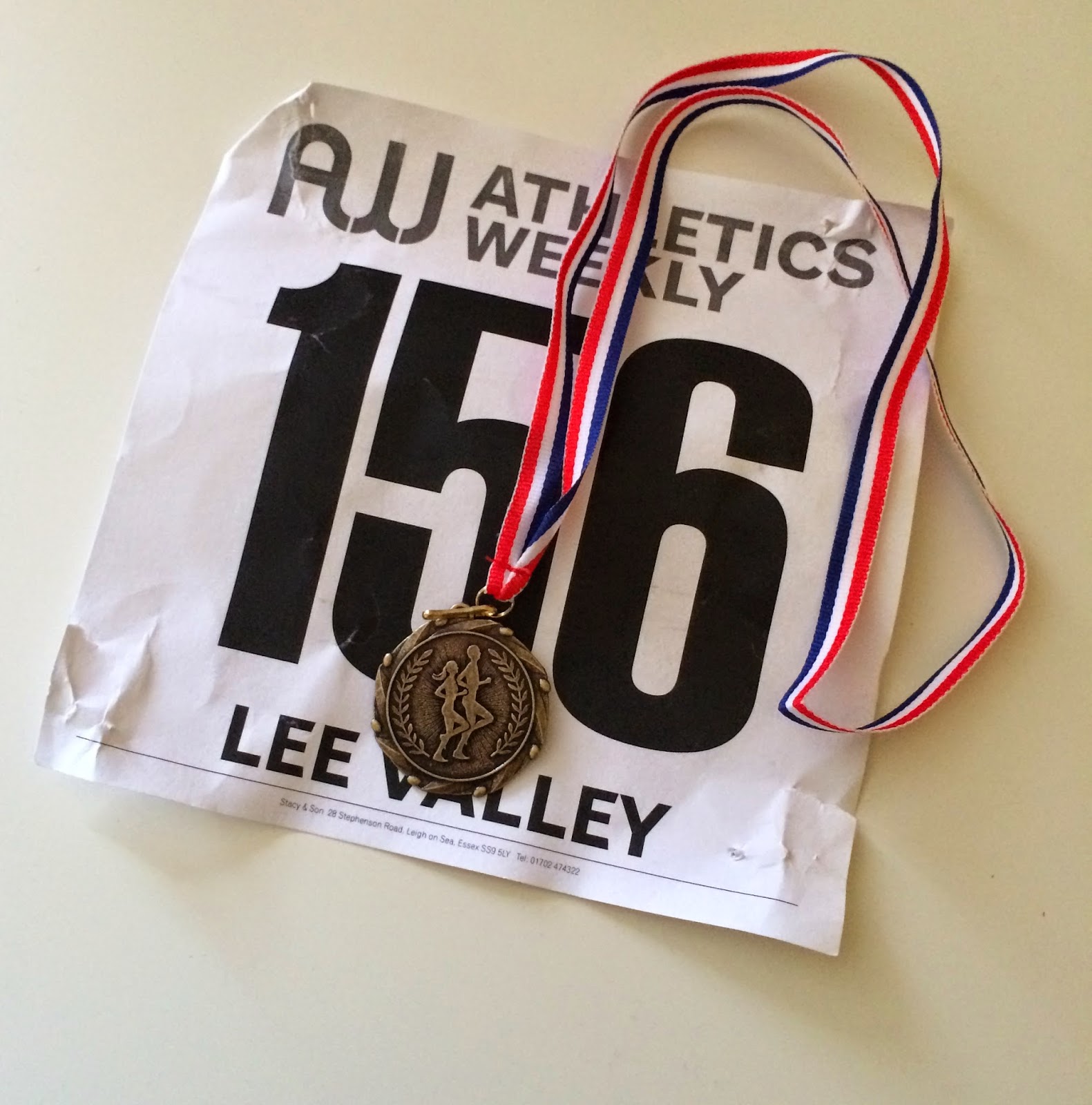 I woke up this morning in a flash and checked my alarm.

Exactly 2 minutes before the alarm I'd set was due to go off. My running gear was stashed in the spare room along with tights and a jacket. I'd lowered the handlebars and taken the touring rack off of my Kona. The plan was to have a light breakfast and then take a leisurely ride up to the Lee Valley Athletics centre for a 09:00 start to the race.

Needless to say I panicked about everything from the route there to the fact I've never raced as an adult...

The nice lady on google maps talked me through the route there, although I did find myself correcting her out loud a couple of times. The only other people around at that time on the river are the sunday morning fishermen.

I parked up and locked my bike before going in. I soon discovered that everyone else had wheeled their bikes straight through. I was given a number to pin on my shirt and some safety pins. I wandered off to find the lockers and pin on my number, only to realise that it would have been easier if

a) I had taken the shirt off to pin on the number... and not my trousers
b) I had not been wearing my helmet which I should have left with my bike.

Outside and the race organiser ran us through the route. After about 30 seconds I realised that I couldn't remember this under any circumstances so as I was going to be some way off of the front I'd follow people and look out for bollards. There were only 15 runners this year as opposed to 50 last year. I don't think the rain, lack of a website or race pack, and no online info played any small part in this, but if this is your first time this is a nice and short race

On the dot of 09:00 we were off. The pack split quickly into the skinny people in tri-suits at the front and everyone else spread out according to ambition more than ability at this point. I say this as for the first half of the running section I was about 5th until passed by all but 4 runners on the back section.

I took my time getting on the bike and was passed by one of the remaining runners in transition. But the bike bit was fairly easy I was able to pass them quickly and get in front of another rider quite quickly. I slowed down a lot as we passed some fly tipping and a caravan I hadn't remembered being there earlier (although it could have been fresh) before pushing on and finding I was still on the right path.

Running after legs 1 and 2 provides an interesting distraction in that my legs had jellified a little and I wanted to be sick. I had drunk too much fluid on the bike section and was making an awful sloshing noise as I ran. 3 laps of the park and I didn't feel too bad as I crossed the line.

Afterwards we chatted sitting on the track waiting for the last couple of runners in. I was third from last. There was a quick presentation and we were done. The ladies winner looked about 18 and this was her 4th win. I still had a lap to go when she crossed the line. The men's winner had left East London by the time I finished.

It was 10:00 am on sunday morning. I rang Sophie and asked her to put the kettle on. It started to rain.

Posted by thelighterthief at 13:20 No comments:

This good Friday Sophie and Rachel had agreed to join David and myself for a ride to Brighton. Unlike the usual and slightly epic route over the south downs, culminating in another failed attempt to tackle the ditchling beacon, we opted for a route we hadn’t tried before. 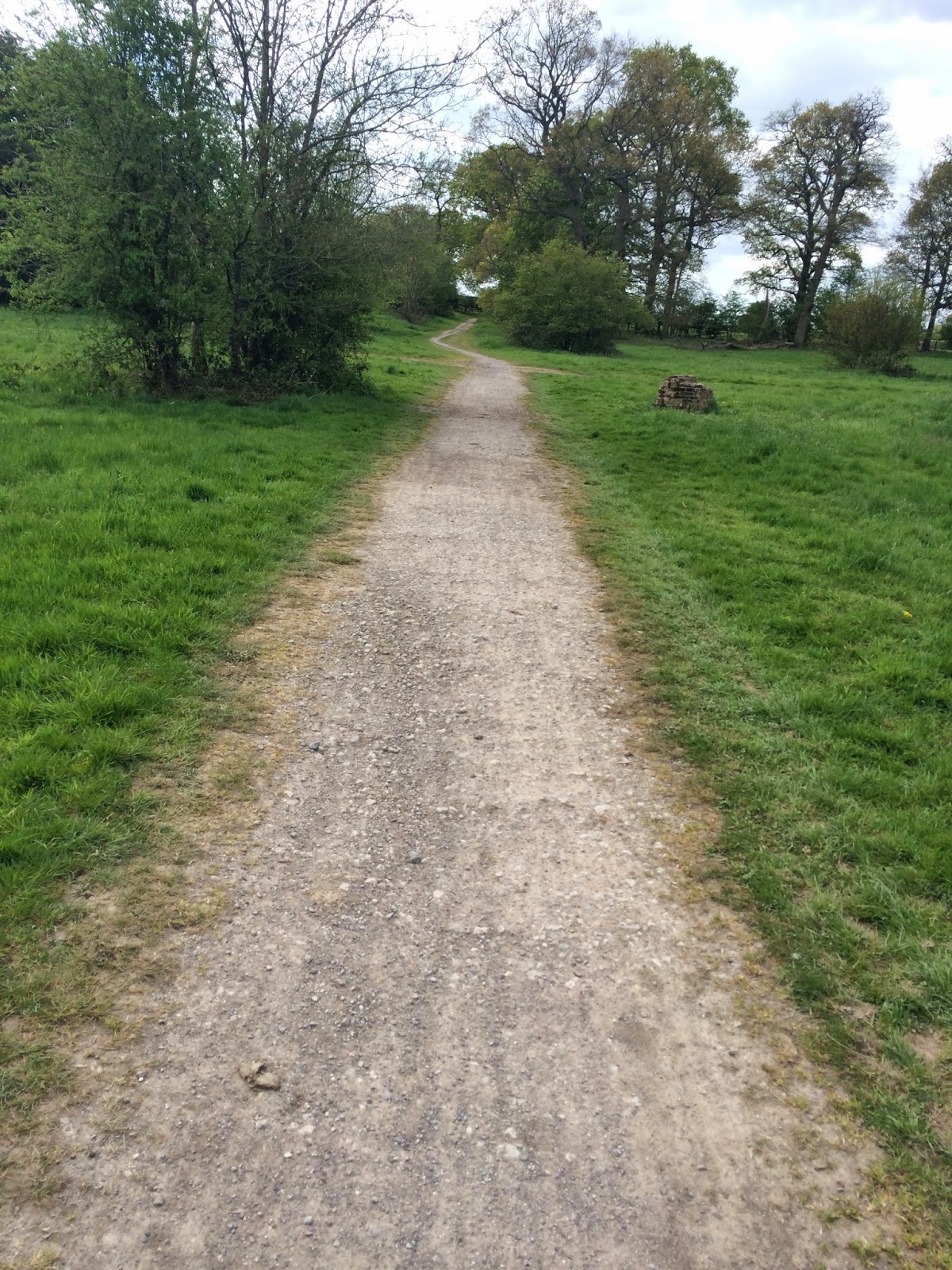 After much to-ing and fro-ing we opted for Horsham to Shoreham. A simple 26 mile route with  a few extra miles tagged on for the last leg to Brighton. 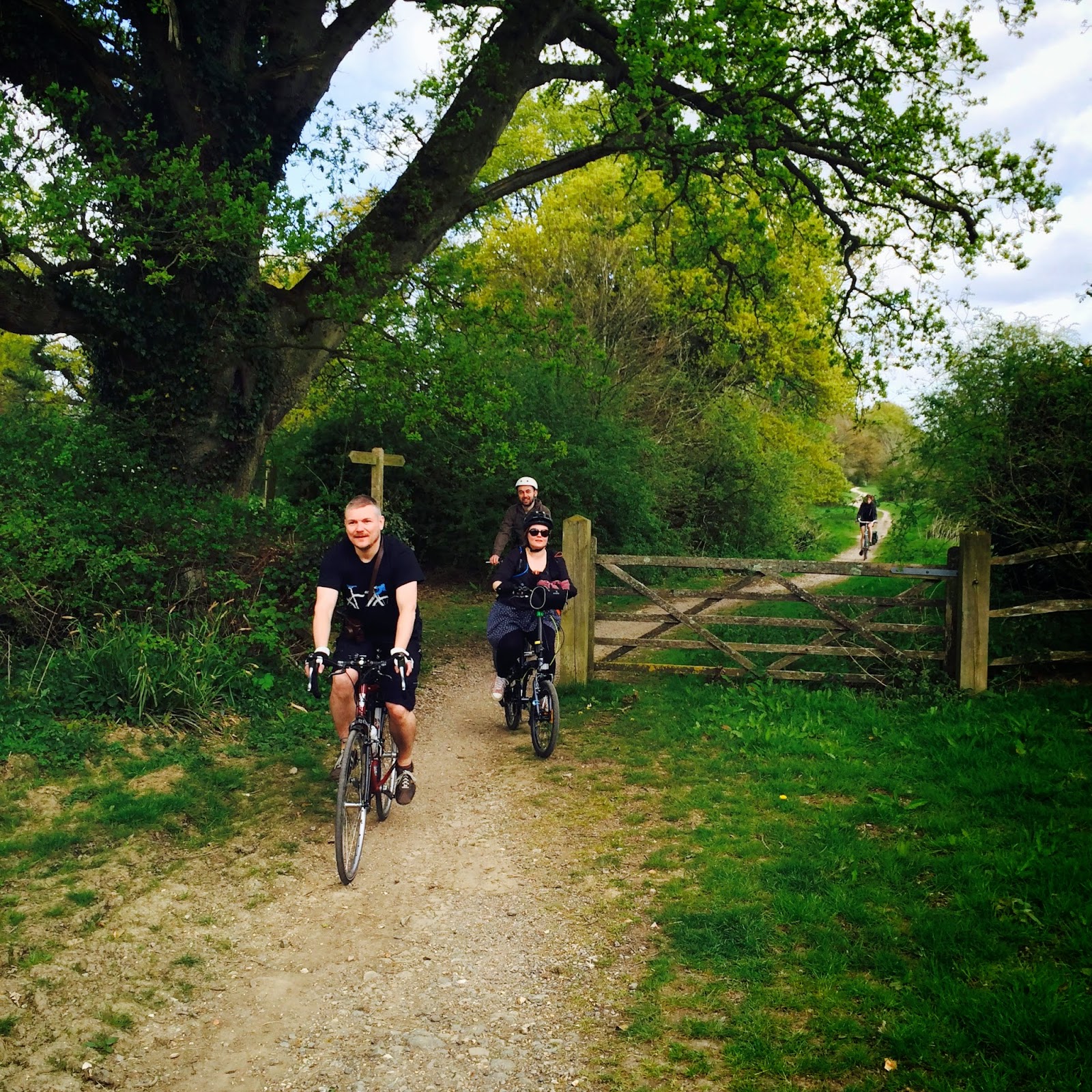 Many of the reviews of the route suggested it was unmanageable on anything other than a mountain bike. I opted for the brompton as it would be easy to take on the train and has Marathon tyres on which are much better suited to this kind of journey. Most of the other bikes we saw were indeed full suspension mountain bikes, but you don’t need to go that far unless you want to do the journey really fast, in which case I reckon an old fashioned touring or audax bike, or one of the new cyclocross hybrid would be quicker. 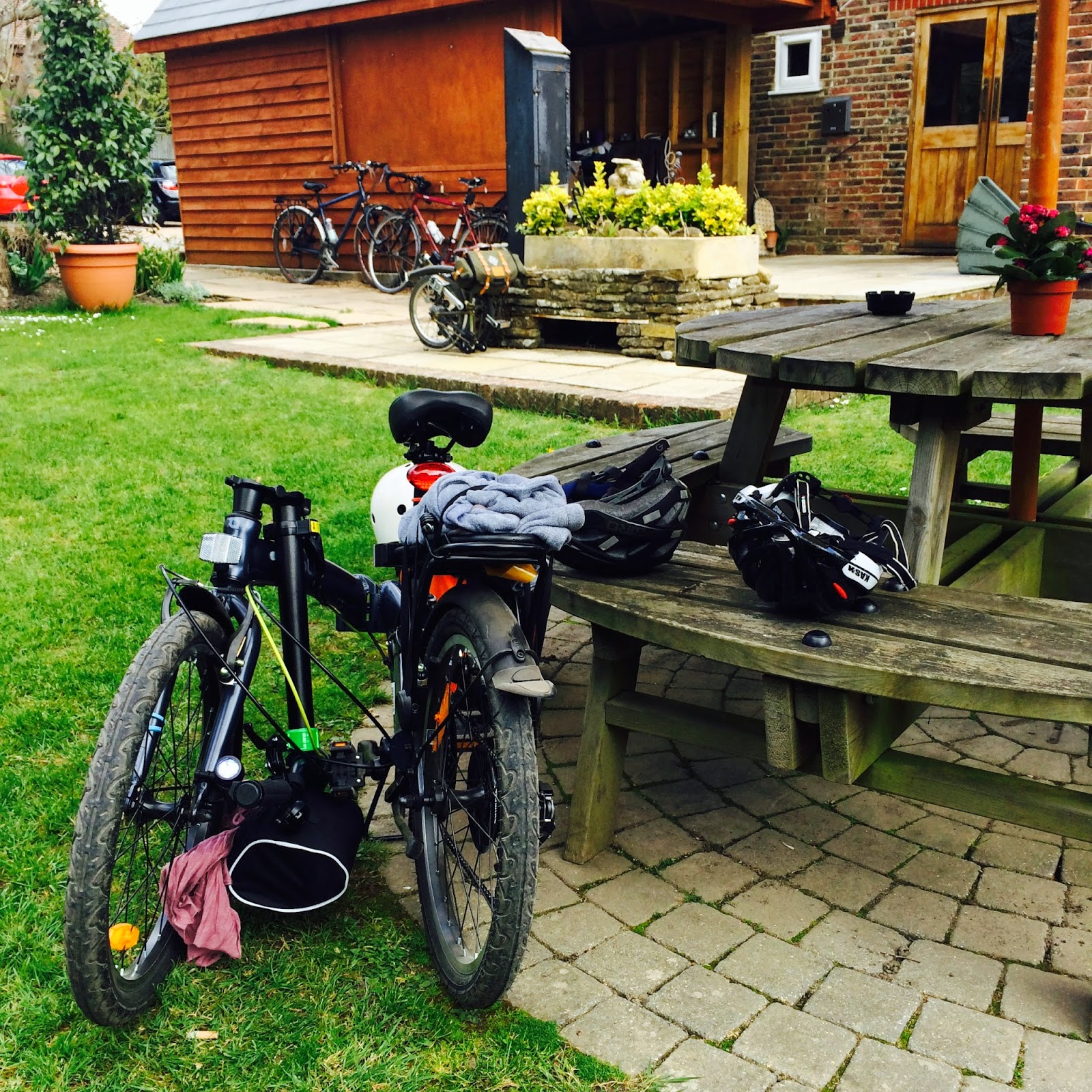 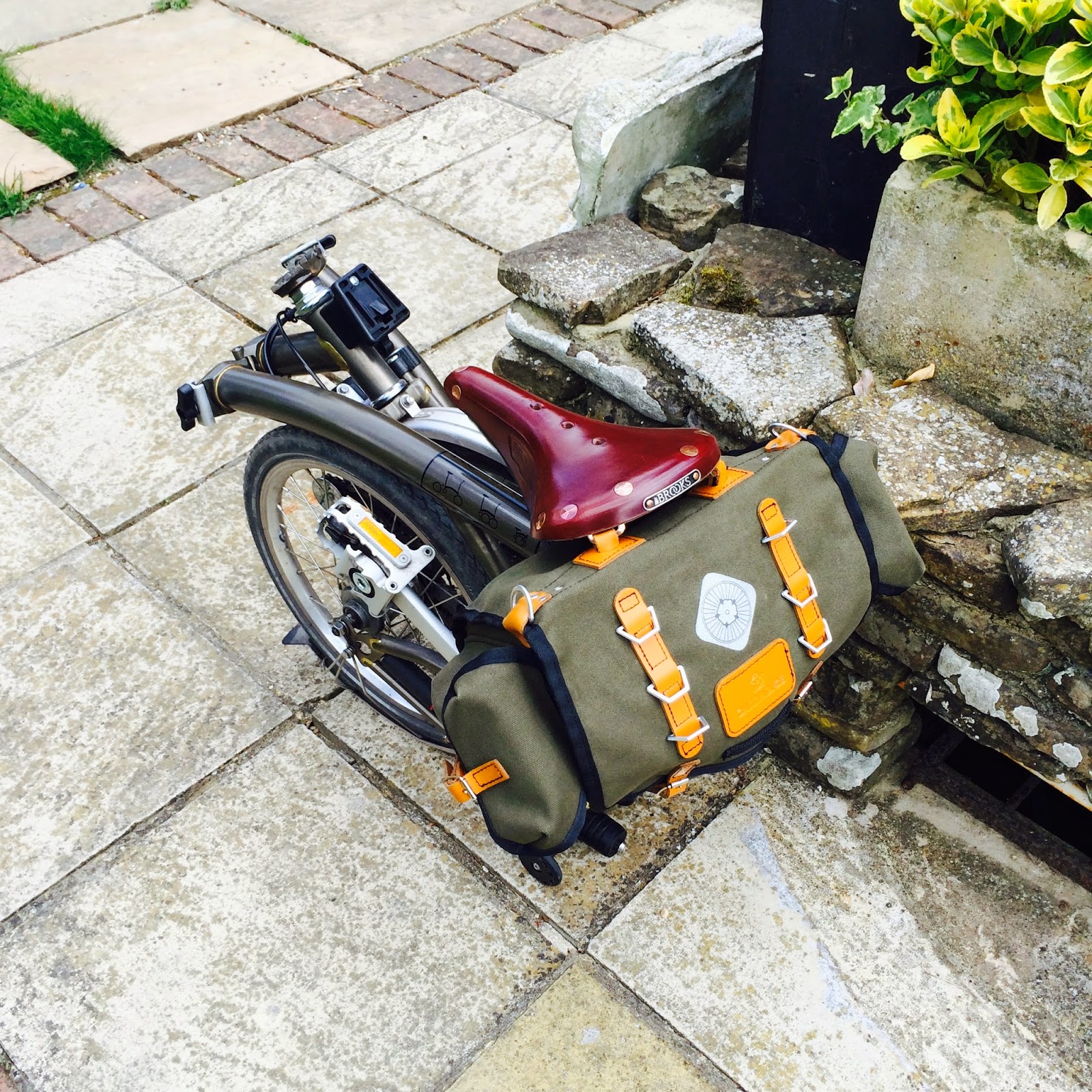 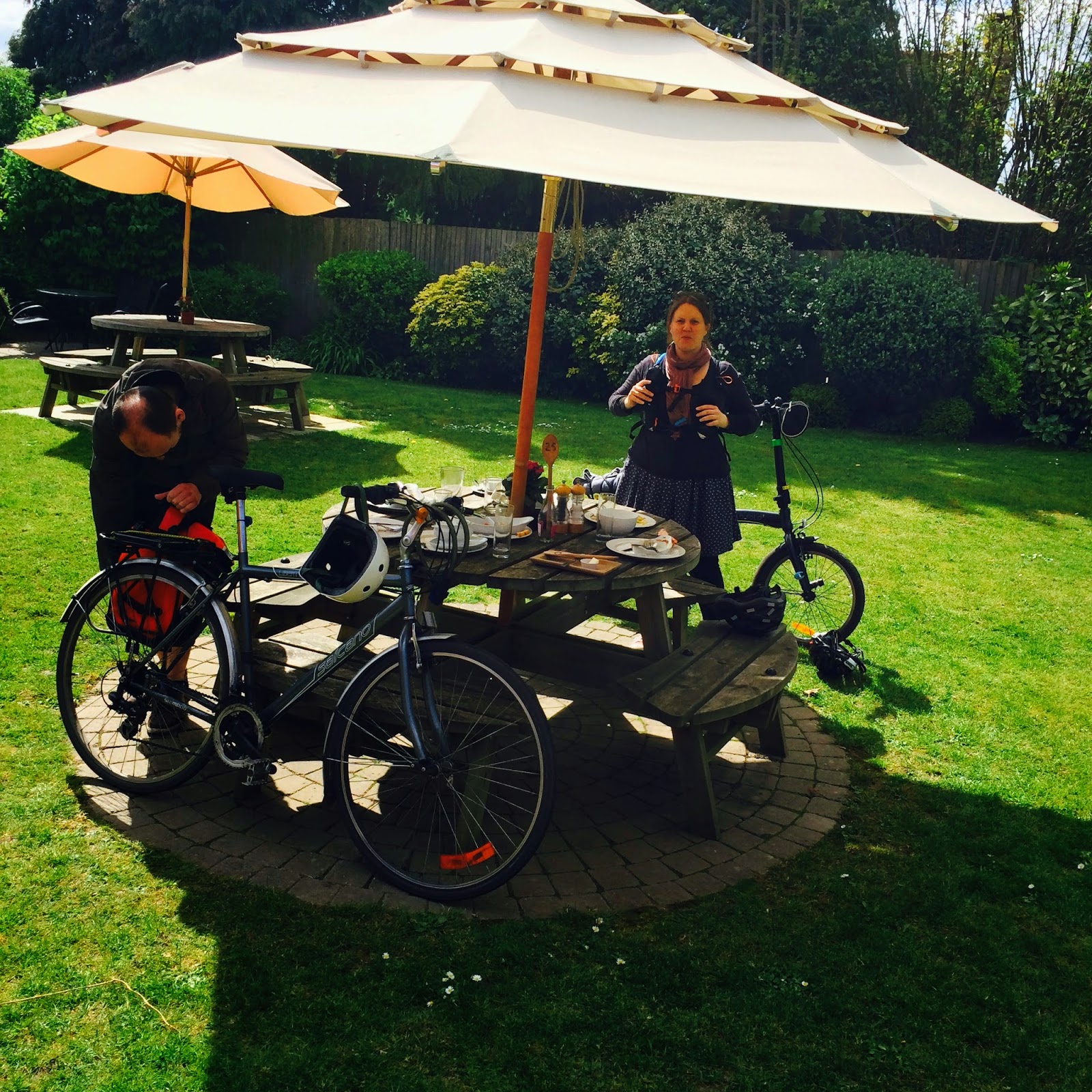 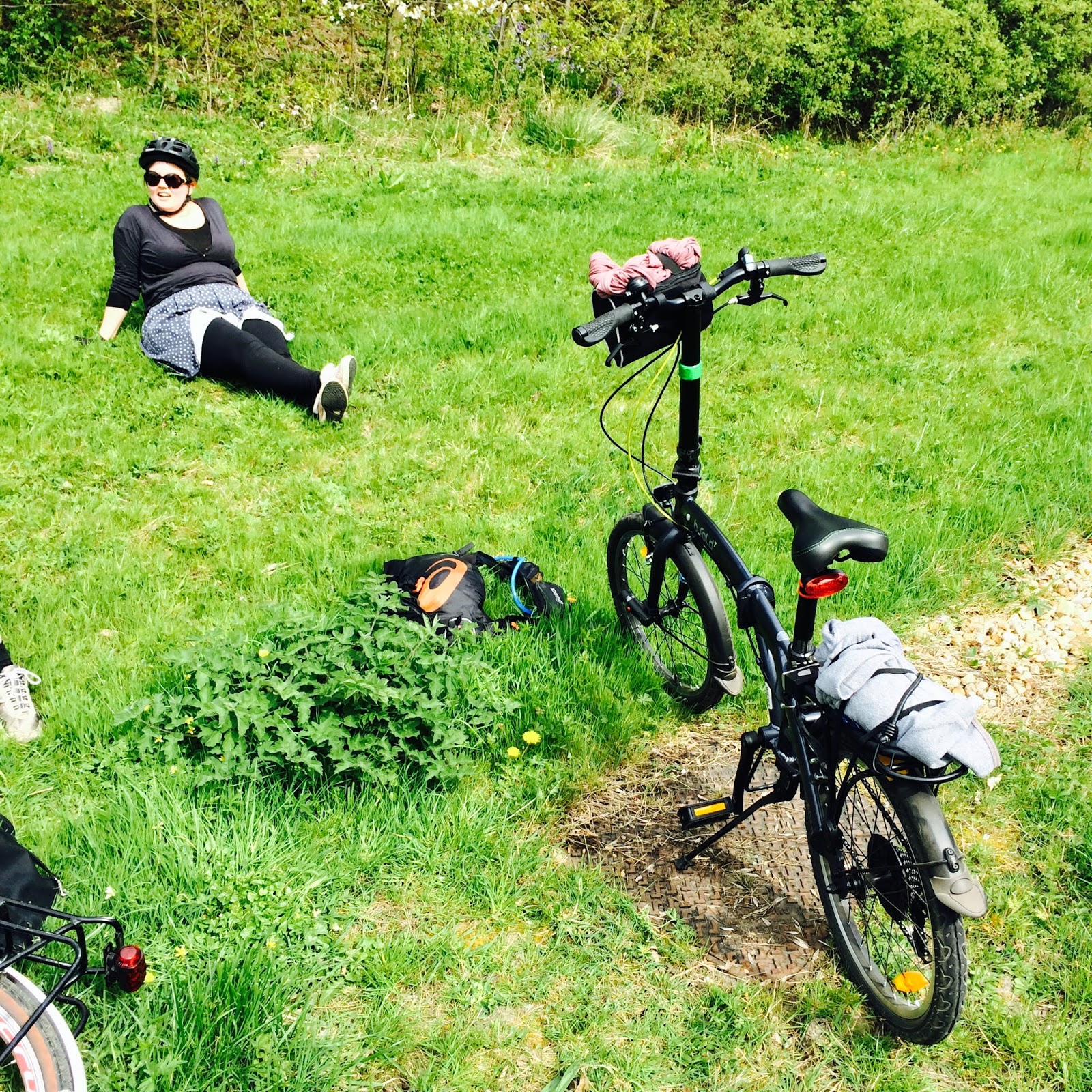 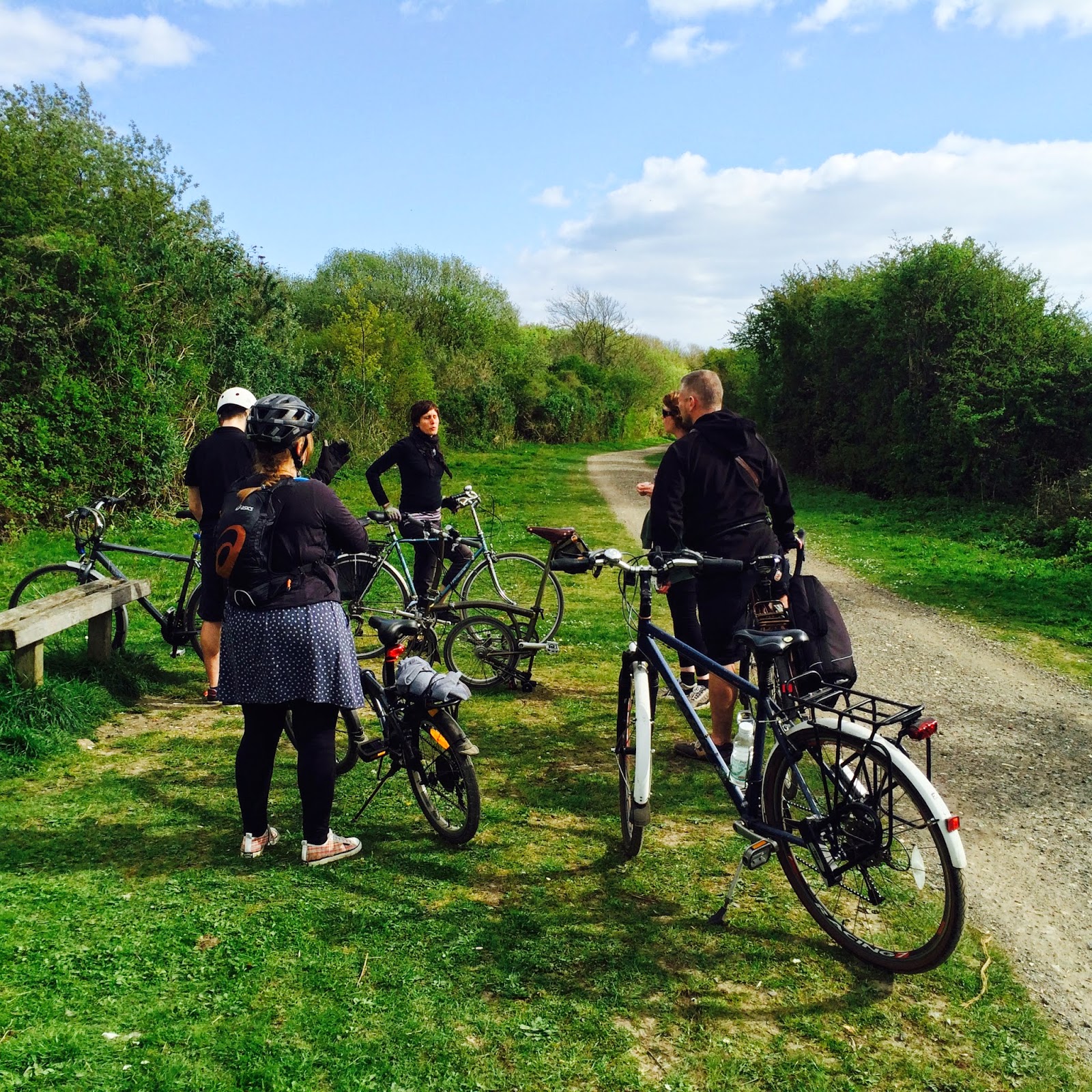 As you can see from the pictures we had a motley assortment (or Crue if you like) of  bikes covering multiple “disciplines.” In truth it is manageable on any bike you want to go on, although I’d avoid anything too roady.

Inevitably we got to Horsham later than planned and decided to forgoe the first tea shop to get a few miles in before lunch. Had this been Holland we would have been passing cafes all day but refreshments were not all together easy to come by. Indeed with a group of 6, including 3 vegetarians, found it a little tricky to get lunch at all. I had cauliflower cheese and cheesy chips which meant I didn’t need to eat again for the rest of the day.

The route itself is lovely  if a little uneven and potholey in places and the ride into Hove from Shoreham is bleak and industrial but I loved it and will be doing the whole thing again shortly. 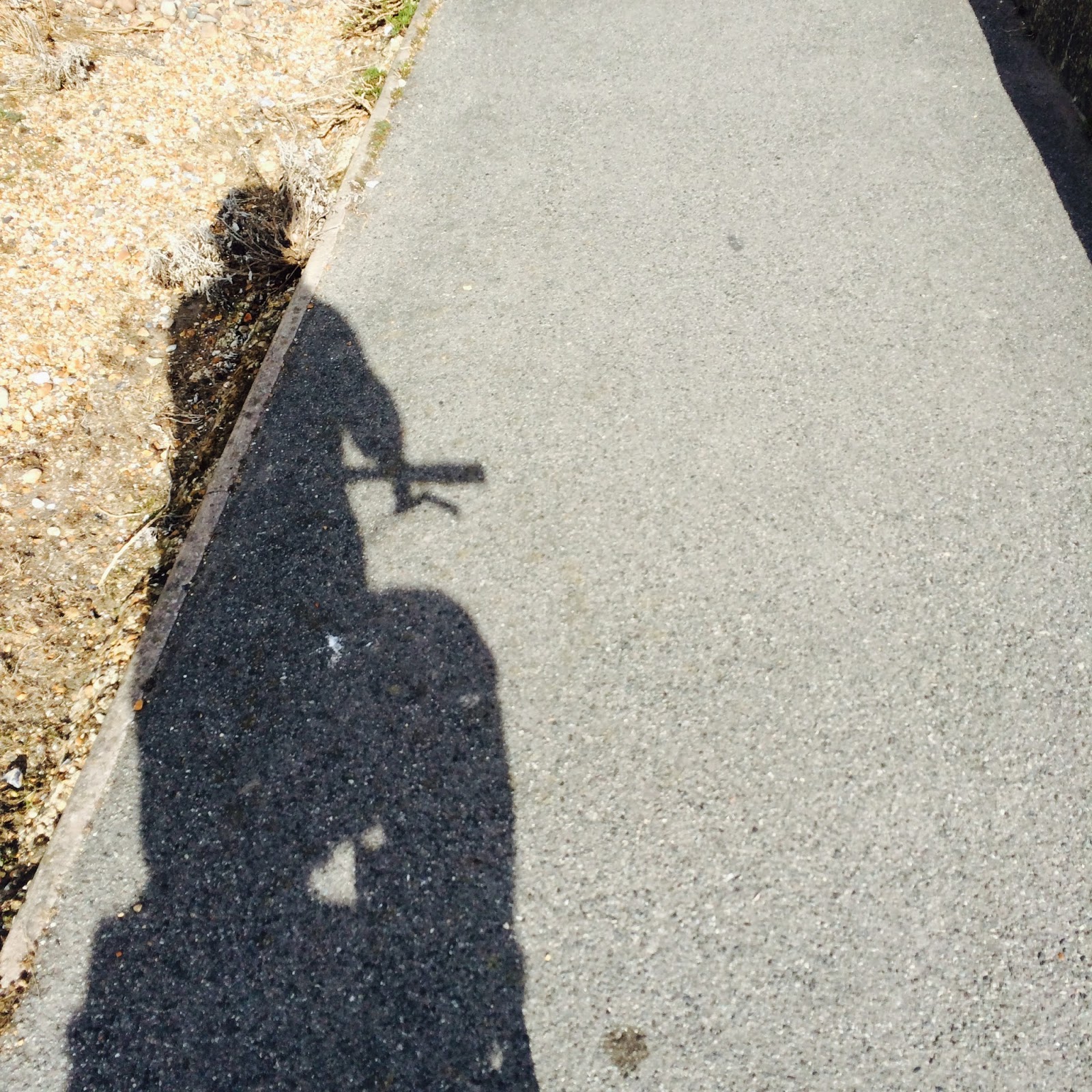 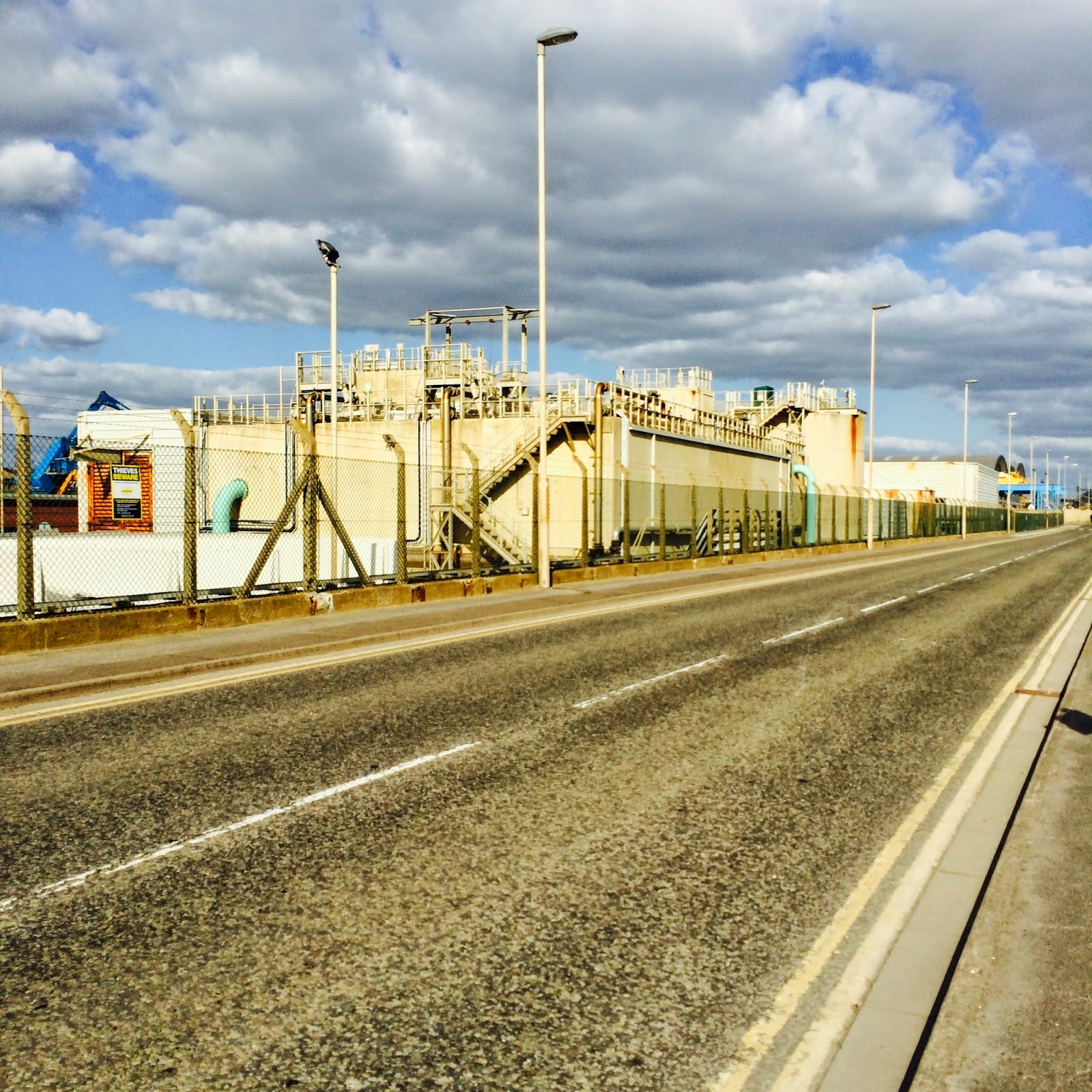 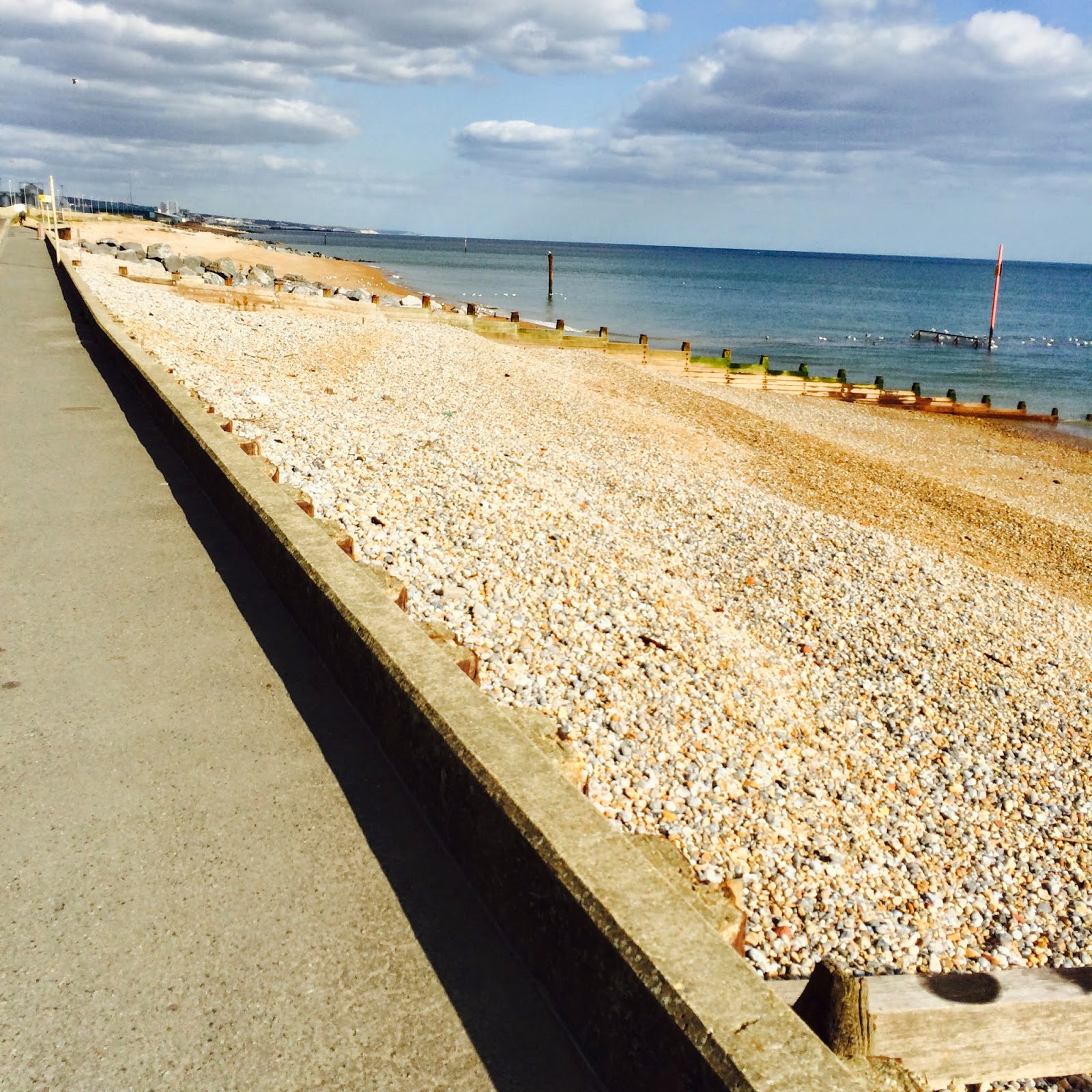 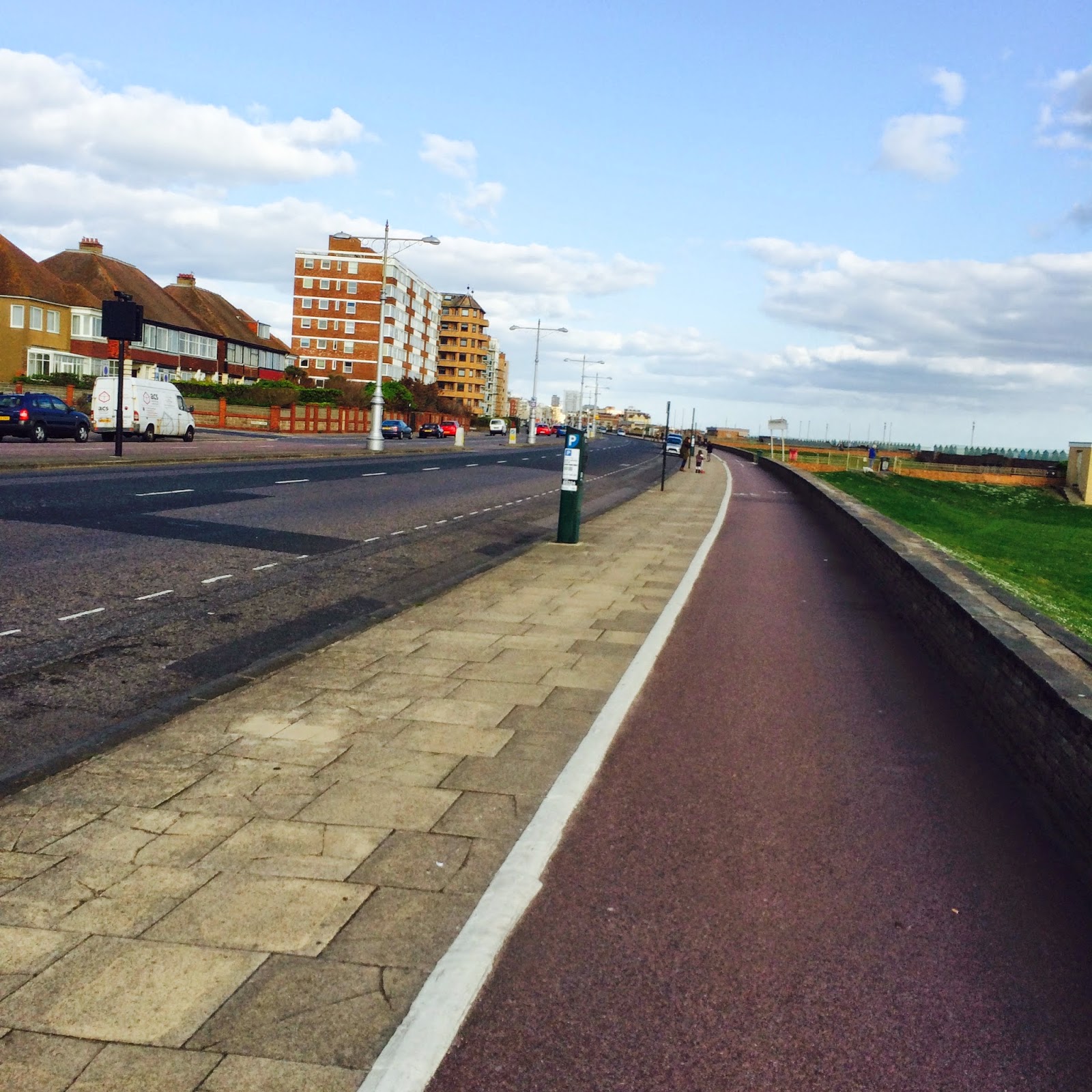 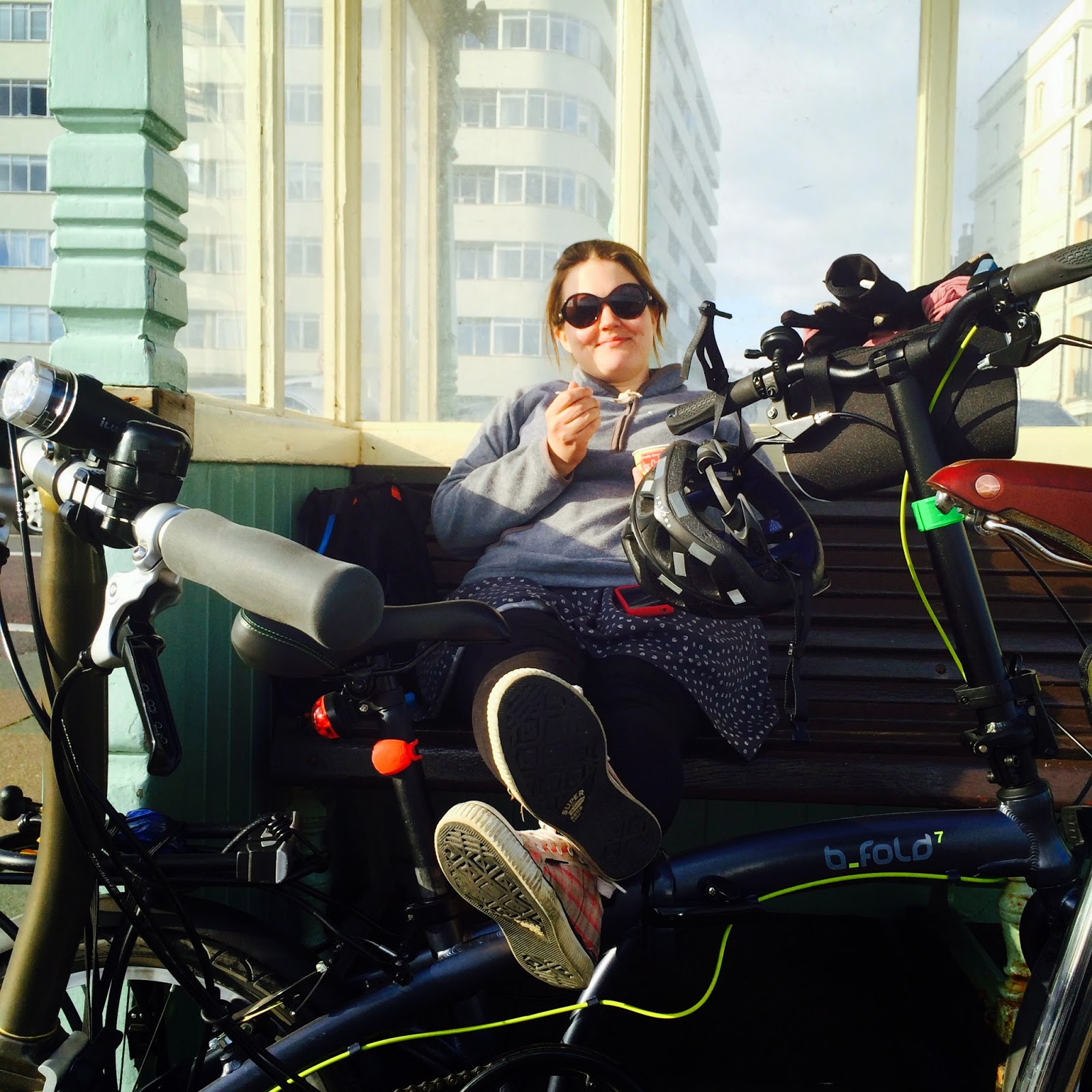 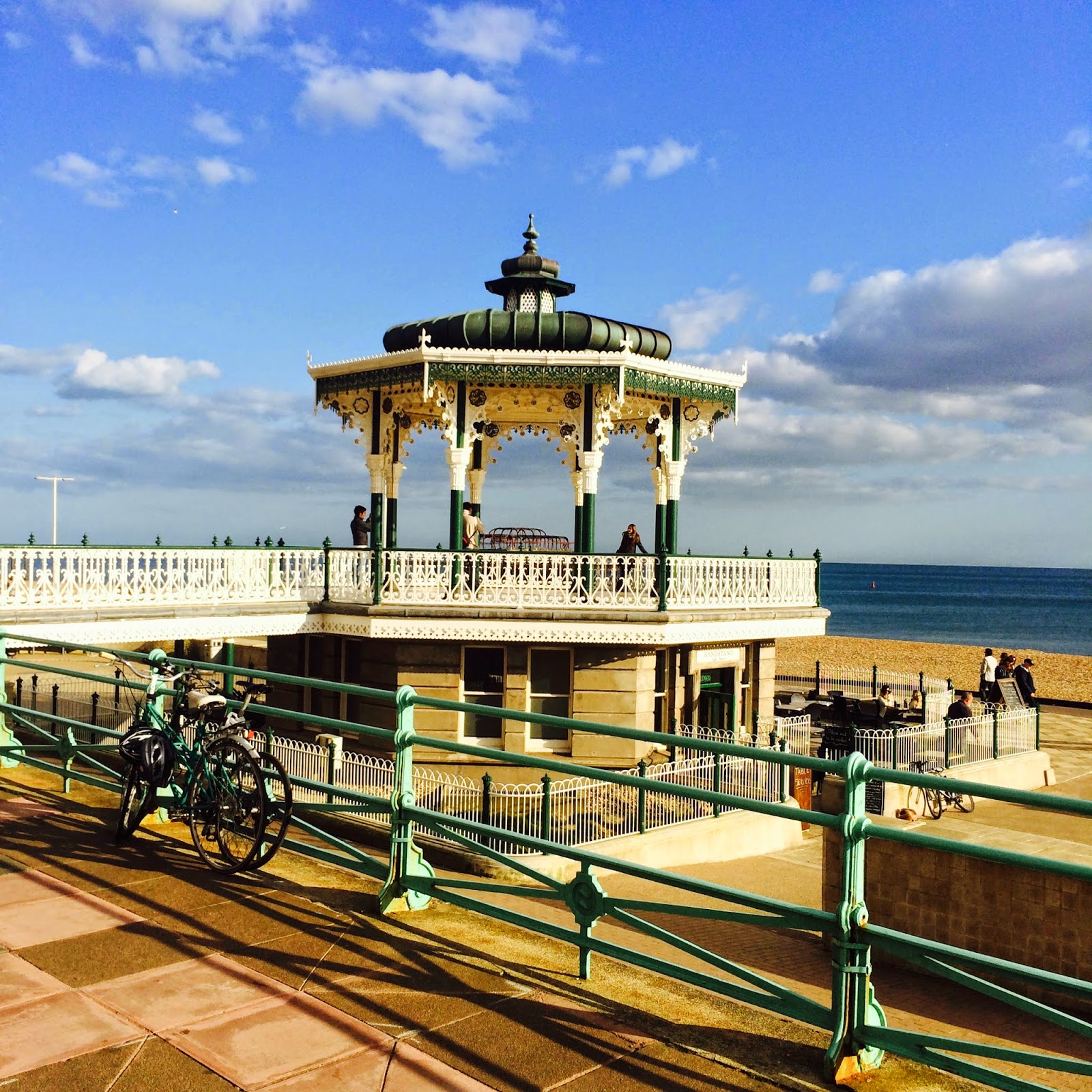 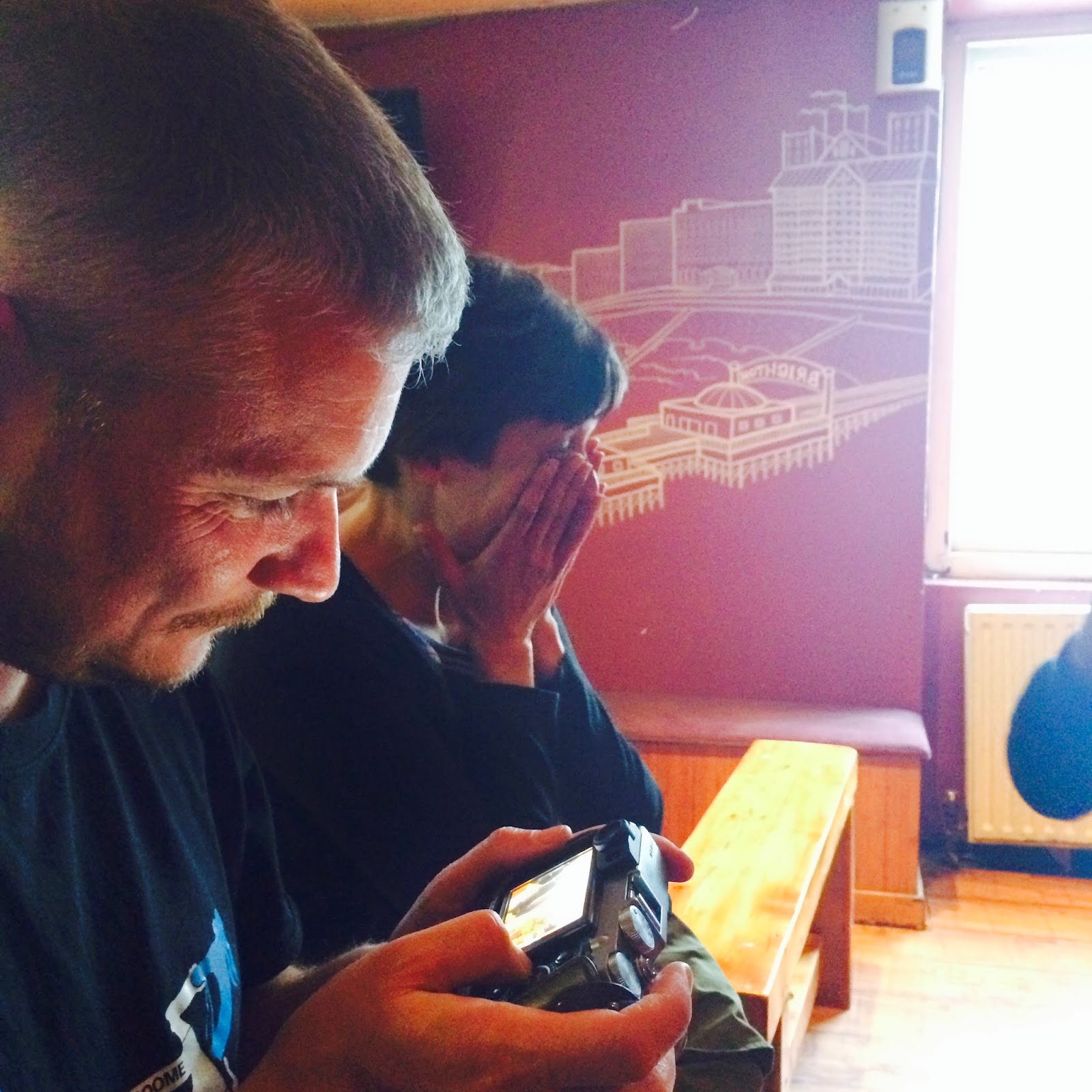 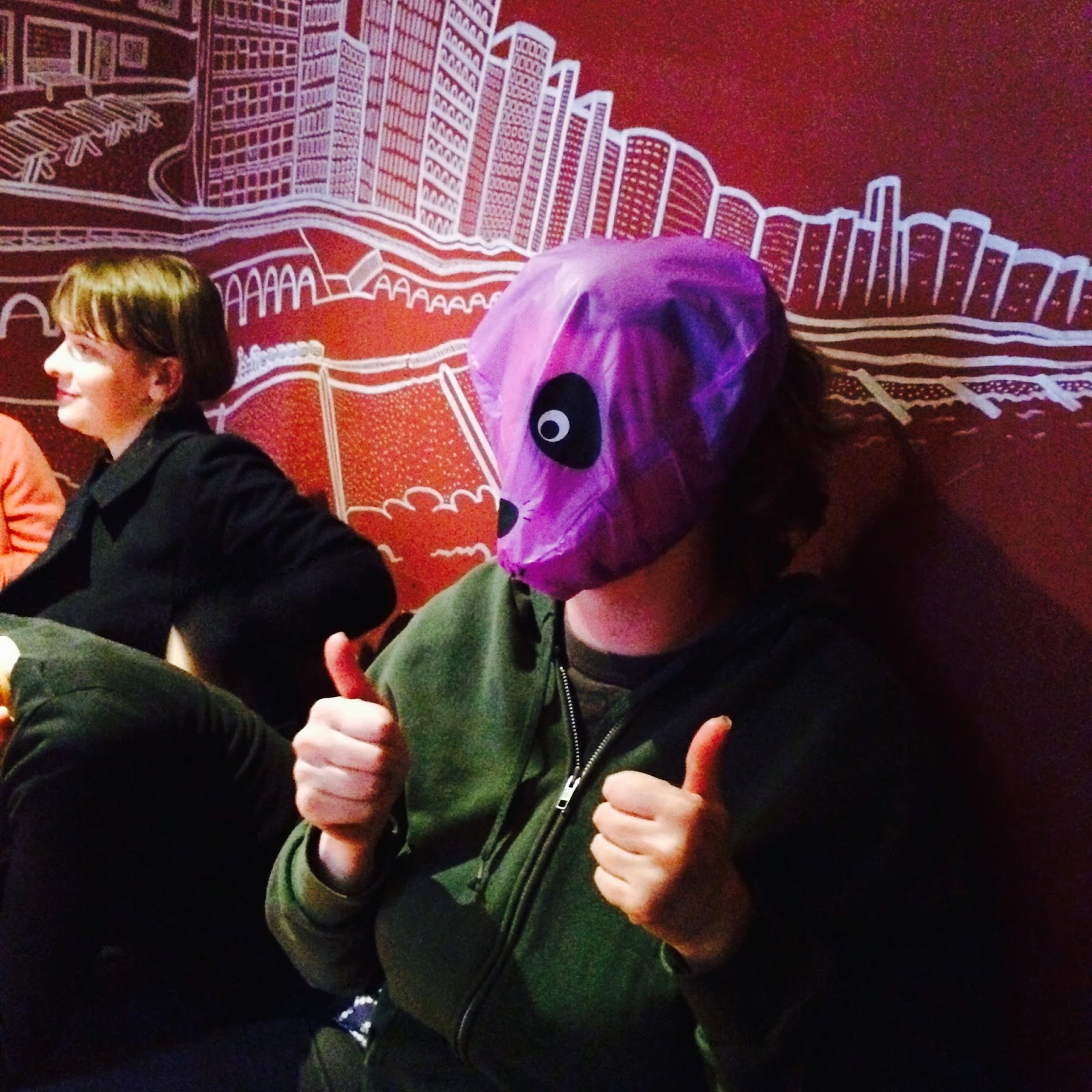 Upon arrival in brighton Sophie and I stopped for ice-cream and a suitable amount of bum rest before retiring to a local hostelry. Unfortunately the first bar was riddled with wankers downstairs and needed the upstairs for a function in the evening, so we moved on to a much nicer bar a little closer to the lanes.

We really should have checked the trains a little more thoroughly because the journey time was an half an hour longer than usual so Sophie and I popped our folders into a black cab at St Pancras. Unfortunately that meant we followed Robert all the way through Islington. He did indicate his pleasure at this with a salute using just a couple of fingers.

All in all a lovely day out.
Posted by thelighterthief at 09:41 No comments:

"I'll be coming to the gig, but I'll need to take it easy though as I'm racing a few days later" 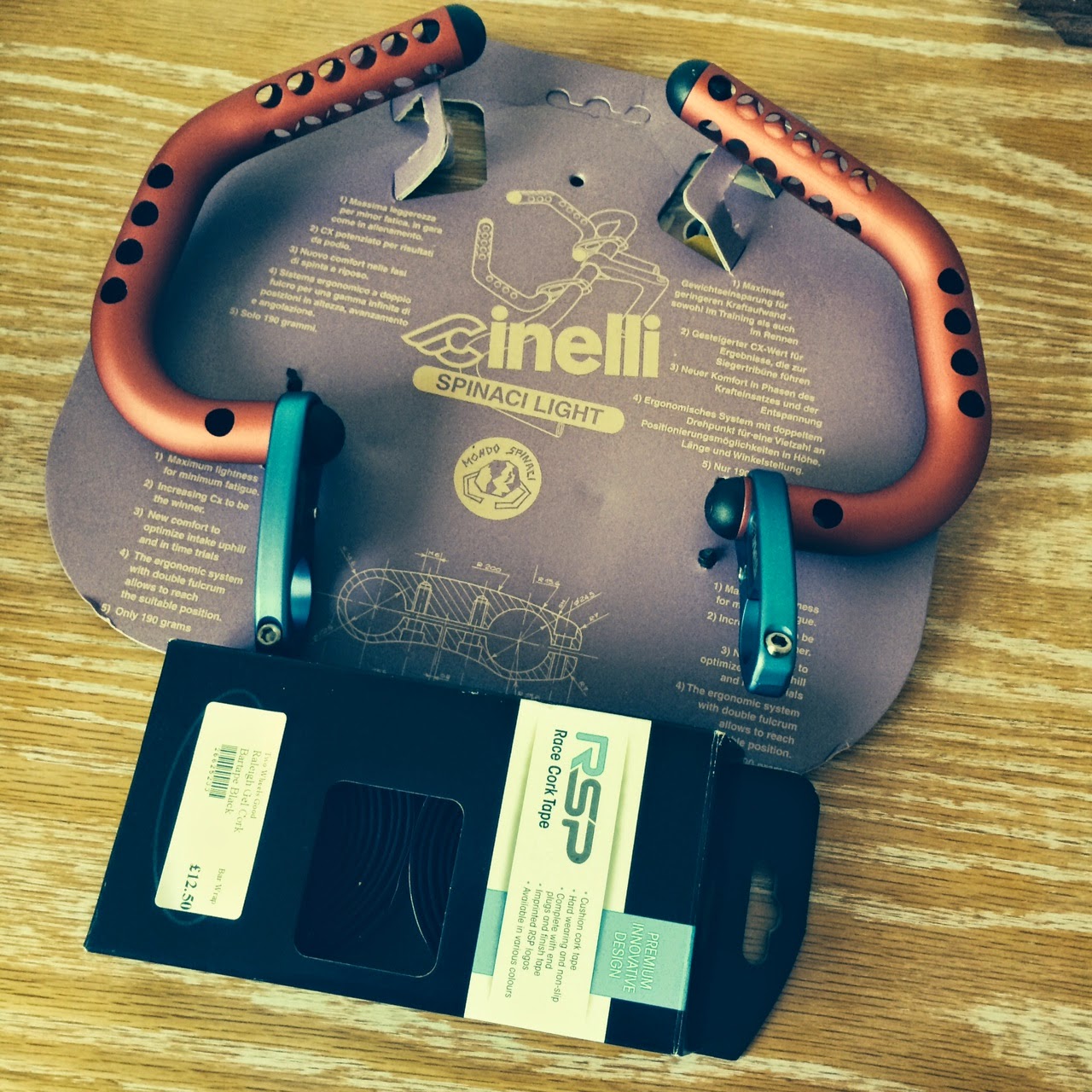 I am not sure how it all happened, but I found myself saying the above phrase out loud on Saturday over a few beers. A few years ago the quickest that I moved was to catch a train if I was running late, or last orders if the pub was closing.

Late last year after some cycle touring and a couple of really quite long rides, I started running again with the express intention of entering the London Triathlon in 2014.Whilst my fitness has been growing, I have started to find myself a little daunted by the whole finish-get-changed-try-another-sport-straight-after part.This is usually referred to as transition.

I'm one of those people with little, or no,sense of direction. When under pressure I often take the wrong turn. Worse than that however is the inability to locate items such as keys and a bicycle helmet when they are in the flat. After seeing the transition area at the Hyde Park Triathlon last year I am genuinely concerned that I'll:

To this end I now find myself entered in the Lee valley Duathlon. It is a relatively straightforward 2km run/5km bike/2km run mostly contained in a park 6km from my house. At present there are only 15 entrants, so I should be able to spot my bike with ease. Even if that is because afterthe 2km run it'll be the only bike left in the transition area.

I've started looking at some quicker pacing and maybe doing a trial run using the bike rack outside the flats as a transition area. I don't normally put on cycling gear for a journey this short - I'd take the brompton.

As the conversation in the pub turned to the perceived lunacy of any absolutely non essential exercise, David piped up.

"You're not  doing it naked are you? Or is that something else?"

You could have heard a pin drop
Posted by thelighterthief at 11:49 No comments: