I have been consumed for the last couple of weeks with the Tour de France. This year the bug bit particularly hard with a trip to Harewood House to watch the depart. It was Sophie's birthday and so we organised a trip up there with friends to celebrate. This all happened weeks ago but with the triathlon training, working and watching the tour I've not had much time to write this up. 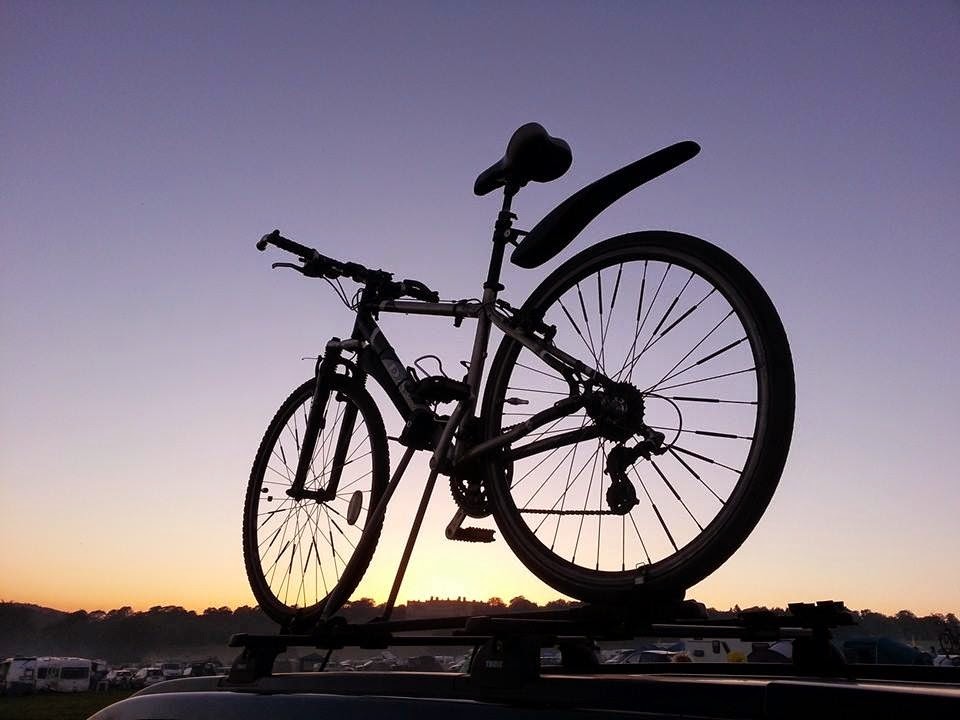 The festival itself was a great experience (hampered slightly by everything closing at 17:00 or 18:00, the food not being veggie or healthy eating friendly, and no-one on  site knowing anything at all ever.) The grounds are lovely and the people were great too. Who knew a festival toilet could be useable after 48 hours on site? 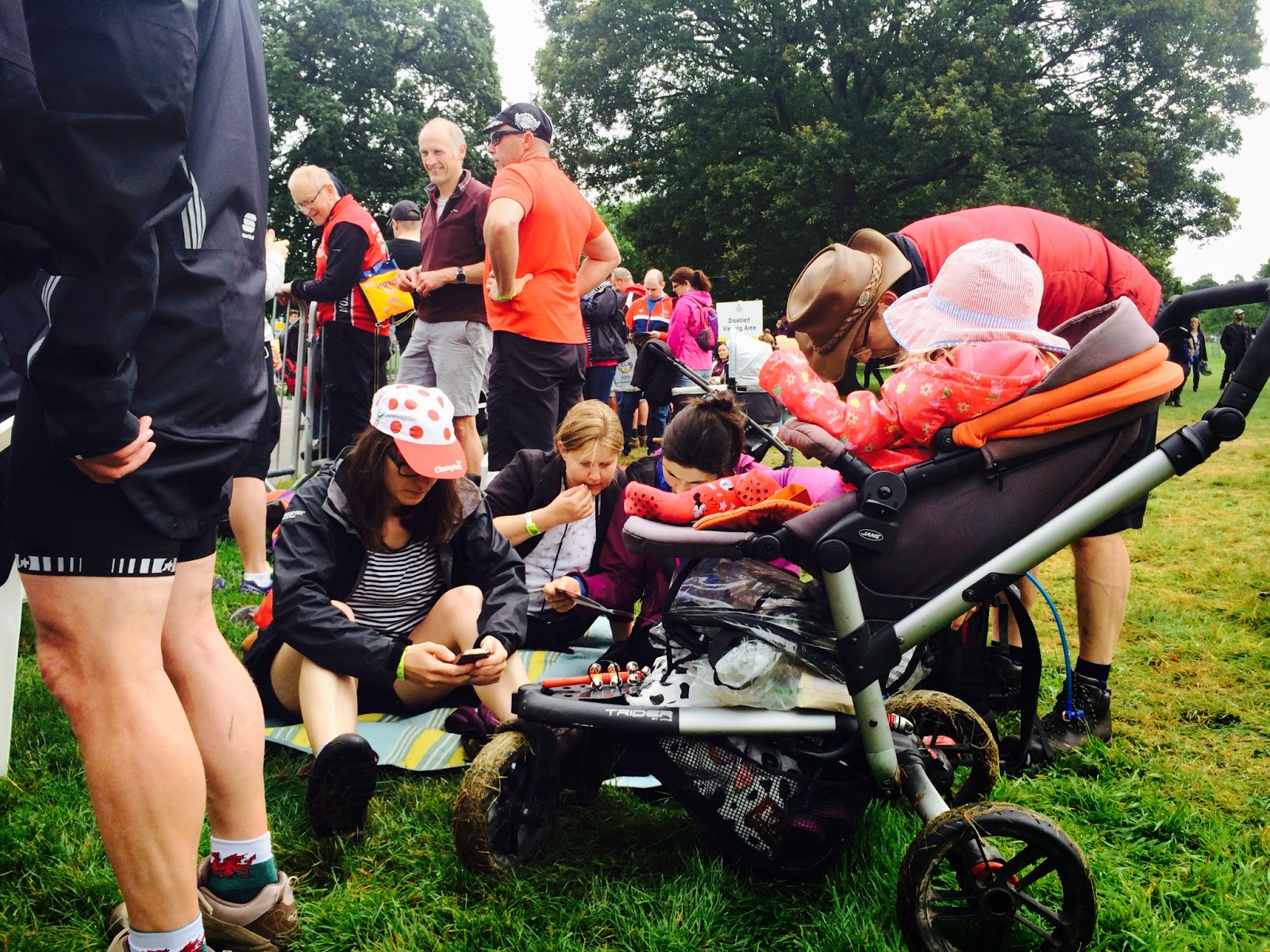 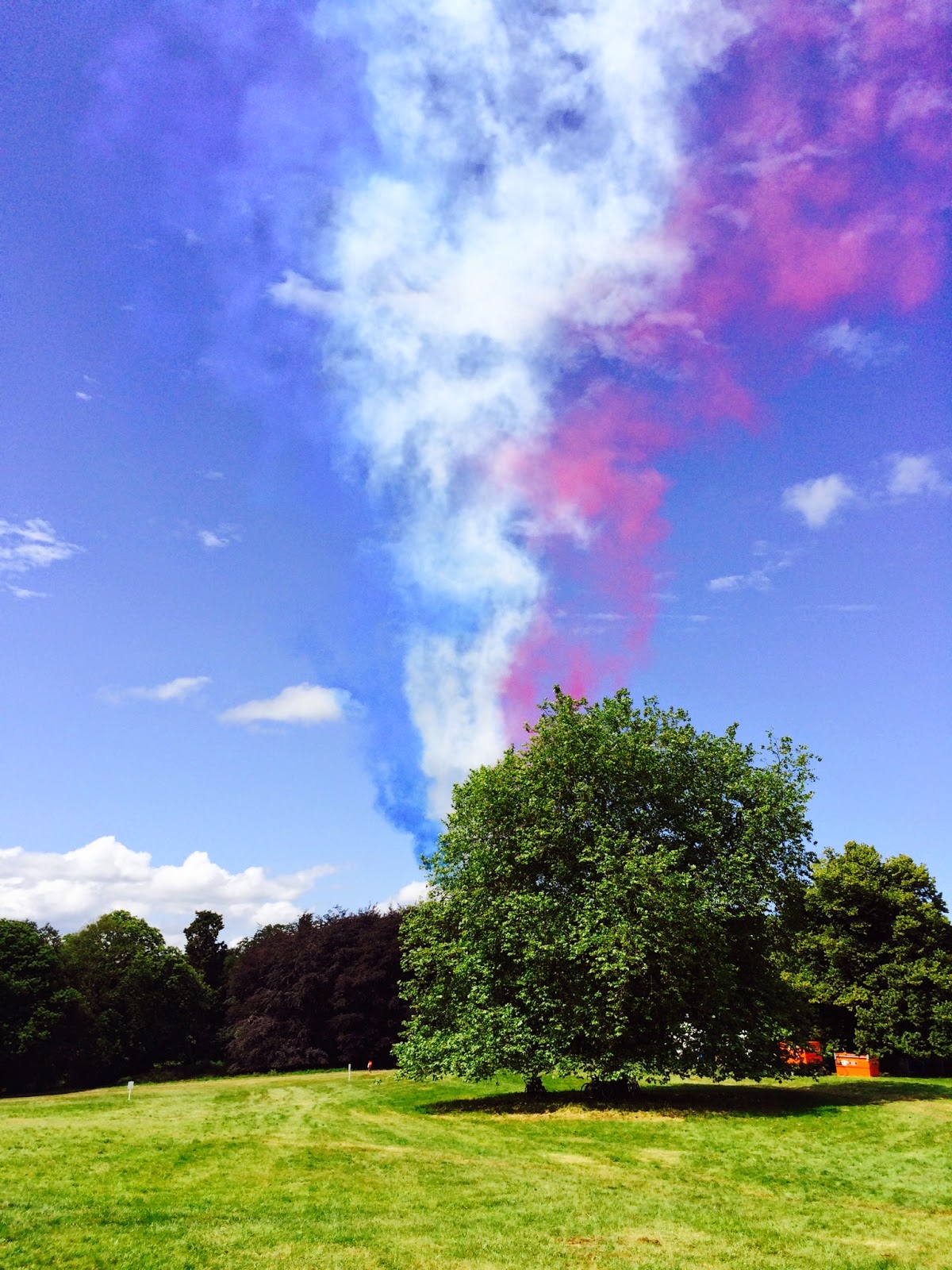 Time trial
On the Saturday evening David and I signed up to do the time trial. It would be our first attempt at a race of this kind. A short 12 mile, or 5 laps of the course, race against the clock seemed like something we could fit in nicely before tea-time.

Alarm bells should have started ringing when the Brownlee's lap time was 5mins and 32 secs giving them a time of nearly 30 mins for the course. The briefing described the course as "undulating". They should have gone off a second time when the team time triallists din't finish their first lap in much under 10 minutes.

The start was a slight uphill gradient that steepened slightly  as it came up level with the house. We passed the grandstand for the great and good (by that of course we mean rich) to watch the grand depart and turned left into a fairly sharp downhill section. I had sunglasses on  and didn't see the first speed-bump on  the the downhill. I'm new to TT racing but I'm fairly sure I'd know if it was a good thing to get "Good Air" over the "Jumps"

I panicked a little and slowed my descent. More corners and downhill under an old bridge. The dappled light meaning I couldn't see the road surface... which is just as well as there was a cattle grid at the bottom. A really sharp turn led to  a short, sharp climb with another cattle grid at the top. Then down over concrete slab roads to another sharp corner leading into a climb.

This climb was presumably what the organisers meant by undulating. Hitting it at a slow speed off the last corner I ran out of momentum about a third of the way up and started pedalling in a lower gear. This climb seemed to go on for ever (This is a TT course not a road circuit. I hit my lowest gear on 3 of the 5 laps, dry heaving on  laps 4 and 5)

The last mile was narrow and dappled and frankly covered in pot holes and covered cattle grids, before turning onto the smooth tarmac of  final straight back to the start.

On lap 2 there was a bike in the ditch at the bottom of the first speed-bump covered descent. By lap 3 there was a pile of bikes and an ambulance.

Highlights for me were making the same guy jump out of his skin (with high volume dry heaving behind him) on the climbs (laps 4 and 5) and David completing the ride 10 minutes faster because he was convinced I was right behind him.)


Posted by thelighterthief at 11:05 No comments:

In 4 days I will be competing in my first triathlon.

I'm not sure I'm ready for the following reasons

I will however be turning  up and doing my best. Overcoming fear and avoiding excuses is what I have gained from this process. IF I want to do "A" I need to do "B" and "C" whether I'm afraid of them or not


This last weekend I went up to Hampstead Heath to try swimmimg in my second wetsuit (The first didn't fit.). It will rank as one of my weirder swimming experiences. Muddy water and not  feeling the cold of it through the wetsuit.I wish I'd done it sooner.

I haven't ridden my bike since the Dunwich Dynamo and it desperately needs a clean. Which is what Saturdays are for.
Posted by thelighterthief at 16:52 4 comments:

Walthamstow
“How are my elbows looking?”

“Good. A little red, but the skin’s intact. What about your knees?”

“Knees? Fine… Good… well the left one is quite bloody actually”

We’d only got as far as Walthamstow. We’d been riding in a group out from London Fields at the start of the Dunwich Dynamo, when I failed to notice everyone had stopped suddenly. I braked swerved and fell off. Yet again my helmet escaped without a scratch. I can’t recommend my giro gloves highly enough as my hands have nary a mark. My skin however needs a total redesign in terms of impact and abrasion resistance. Luckily the nearest shop had run out of first aid equipment so Adam bought some flannels to mop up the blood.

Thankfully the rest of the trip was much more eventful for all the right reasons. 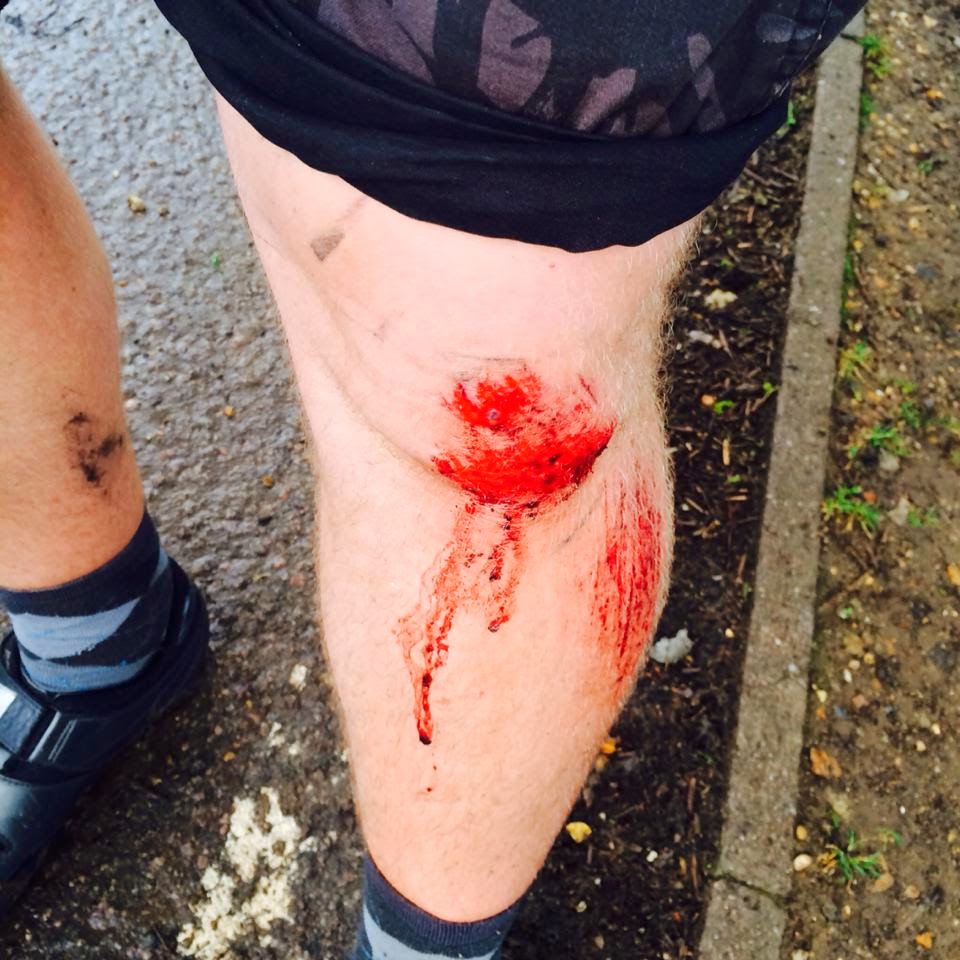 Garage
I’d asked that we stopped at a particular garage on the way out of London. It’s actually in Essex about 20km from the start, but if my leg was playing up it would still be light. I could buy a first aid kit and ride home. I was actually feeling quite up for it at this point and the skin clearly wasn’t going to split on the knee. Inside I opted for a green juice and a samosa. We then went outside to watch a guy negotiate the pumps on a tall bike.

Rain
This year rain featured quite heavily. The rain started gently at first but gradually got to the point where the spray off of the front wheel was washing grit and road sludge into my face on the descents. I’m a fairly cautious descender. Quick in the dry on straight roads, but a little slower in the wet and dark with rain streaked glasses. Dulwich Paragon riders are not quite so cautious and I was startled by the speed that people were able to pass me and disappear with red lights blinking into the night.

At the first pubs we stopped for the loo and David kindly lent me his spare front light. That light combined with removing my glasses meant I could now see the road. I was regularly dropping off of the back by this point, but as David is faster than me and Vera was using his front light to see by I was looking out for the distinctive lighting arrangement we had gone with to catch up with them at junctions.

Pub and a puncture
I pulled into a lovely pub forecourt as arranged to find Vera and David waiting out front. No sign of Adam. I was feeling particularly “Hackney” as I requested a light hoppy ale as the man next to me asked for a couple of pasties and 6 pints of Stella. We were there for over an hour as Adam had punctured and stopped at an earlier pub to wash up a little and grab a cheeky pint.

Lunch and a puncture
The official food stop is just short of Sudbury about 75-80 km in and we stopped for a wee and some food. It’s always slightly surreal to see a bright village hall full of dirty, wet cyclists chatting cheerfully.
As we’d lost a lot of time already we decided to crack on.

As we pulled away I considered shouting to the others. My rear wheel felt sluggish and lumpy. On the first descent things got a bit hairy and I accepted the inevitable. I had punctured. The others were now quite some distance ahead and it was at this point I remembered I hadn’t packed a pump. My frame clip for the pump had broken so I had left it behind.

I flipped the bike, against the rules, and set about changing the tube. I was worried though as I couldn’t find the cause or the hole in the inner tube. At that point I realised the local nightclub at the end of the side road had gone from playing euro house to Bon Jovi. They were nearly done for the night. 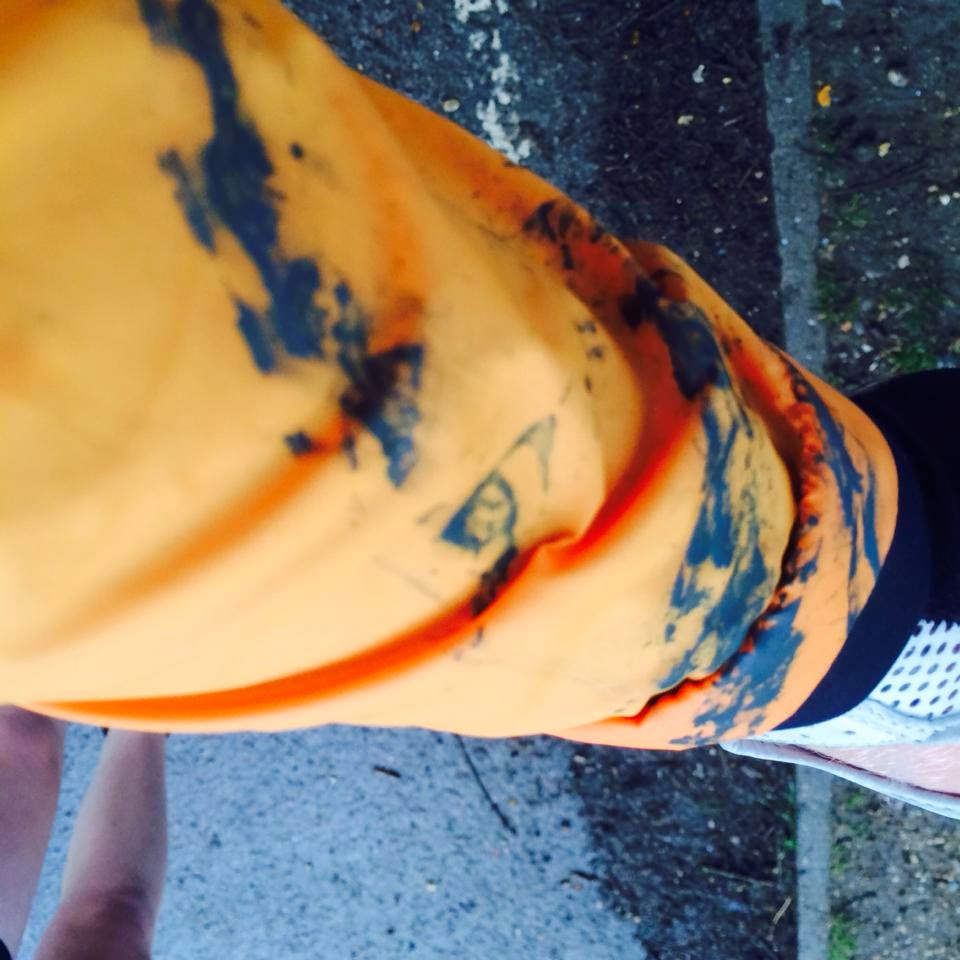 I flagged down the next person I saw and asked for a pump. I started to panic as the nightclub was now playing ‘I will always love you’ by Whitney Houston. The 2 lads who stopped to help were really nice to me given that I was a panicky oil covered drowned rat with his bike in bits ranting about Bon Jovi.

I set off hoping for the best and rode as fast as I dared towards our next agreed rendezvous point just North of Sudbury.

Riding alone along unfamiliar roads is a relaxing pastime I normally reserve for the spring and summer months during the day. Night riding alone is another thing entirely. A single blinking light ahead gave me hope and I found a group to tag along behind for a bit. Shortly afterwards a lady from Stoke Newington slowed down for a chat.

Dawn
The rest of the darkness passed without incident  as I fell behind a bit then caught up again. Adam and I rode along for a couple of hours chatting about our respective lives and interests, stopping for a tea along the way.
Finally we reached the lake and caught back up with Vera and David. Loo stop and the last of our food. Ready to go. Adam spots that his bike has a puncture. 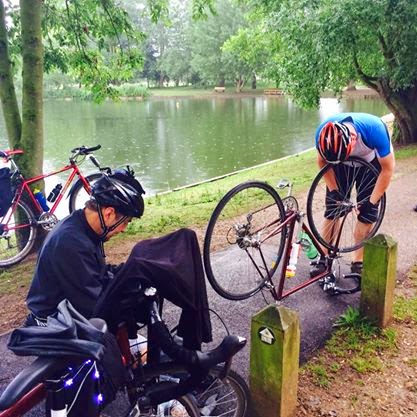 It’s cold by the lake as we do some early morning stretches and fix our 3rd puncture of the day but we’re told there’s only 35 km to go.

40 minutes later we stop for a sausage bap  and are told that there’s only about 35km to go (Deja vu).
The second last 35km passes in a blur of early light and undulating countryside, chats to strangers and turns through sleeping villages. The last few miles are gravel covered and slippy from the rain. And then we’re there. 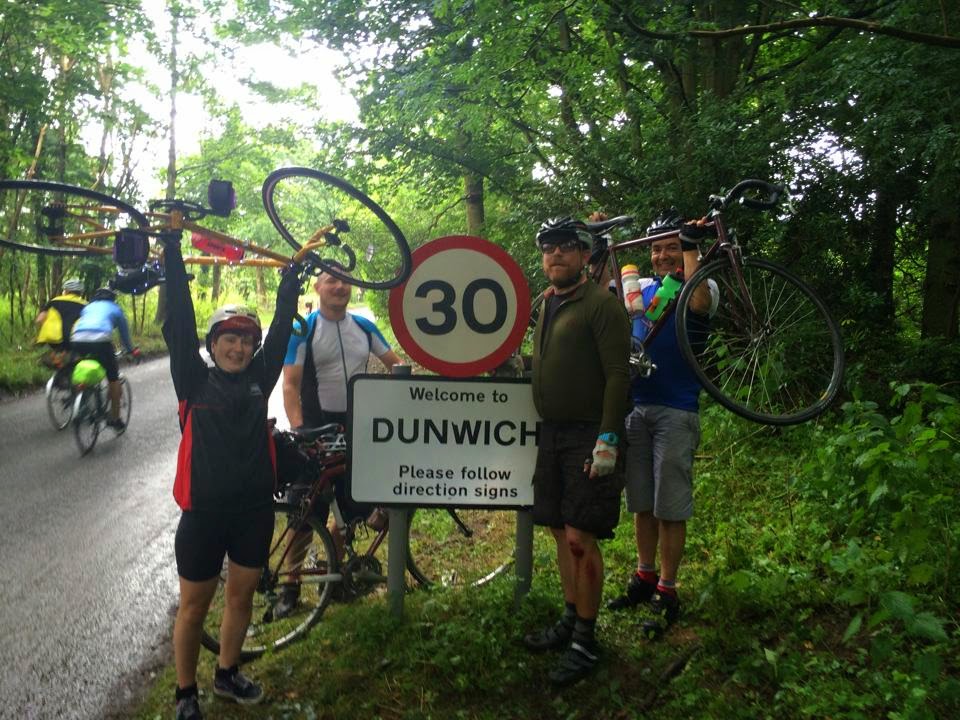 Dunwich
The end at Dunwich could do with another post all of it’s own but queuing and eating pretty much summarises it. Needless to say when we did get back to London I had another flat. When we checked out the tyre there was a tiny spike inside, that when pulled out with pliers, revealed itself to be a 1” piece of copper wire from the fairy lights that must have tangled in the rear wheel at some point. 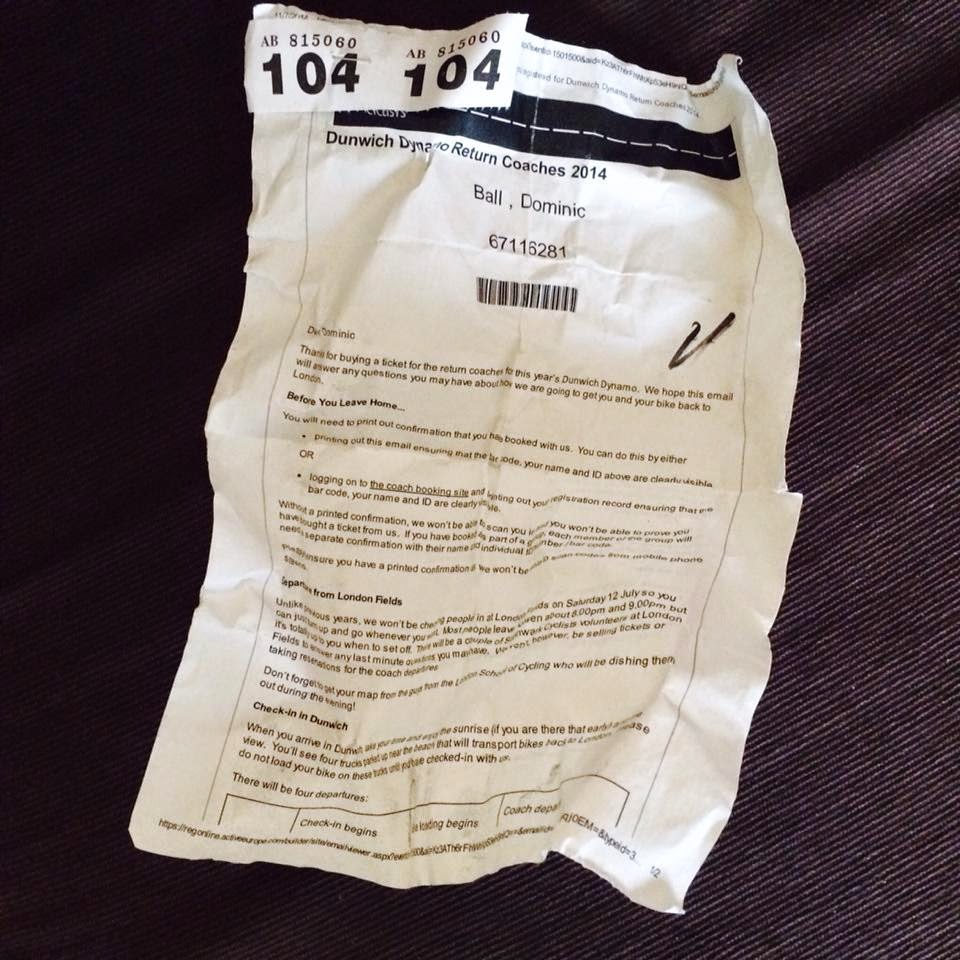 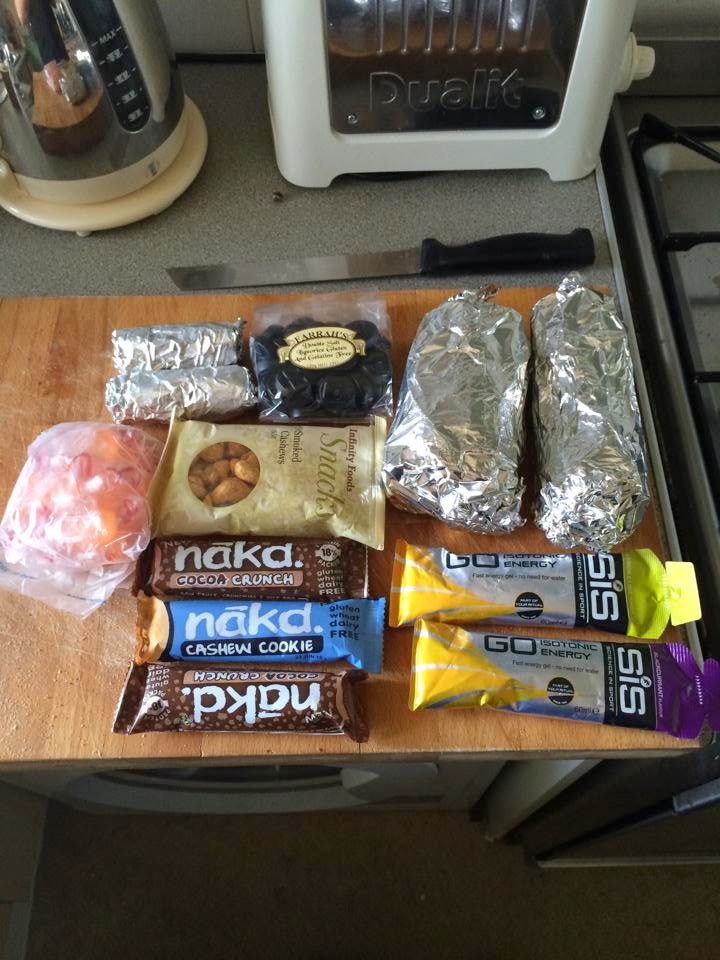 Consumables
Juice and a samosa, Falafel and hummus sandwich, Peanut butter and Avocado sandwich (nicked the idea from Rich Roll), 2 stuffed vine leaves, 3 Nak’d bars, Peanuts, Crisps, Salted liquorice (3 or four pieces), Barley Sugar (about 6), Sausage Bap, I pint, 2 teas, 4 litres of water, and a veggie breakfast  on the beach. At no point did I consider eating the gels I brought.
I also got through 2 inner tubes, 4 AA batteries, an oil covered rain jackets and a set of fairy lights.

Posted by thelighterthief at 11:57 2 comments: