The hill that beat me (reprise#2)

3 years ago, whilst in the early stages of training for LEJOG, I wrote a blog post about cycling around Richmond park. I had trouble with one of the hills. I wrote about how I hoped to return and beat the hill once I had improved.

I wrote about achieving this in a post back in 2013, however today I noticed a new development

This morning I rose early to meet Jonny at Richmond Park. The plan was for me to cycle down and back, but we would do a couple of laps of the park and have a catch-up. The day that I had gone to the park for the first ride, Jonny didn't make it due to a crash. He was ok but I'm not sure we've ever ridden it together.

The ride there took a little longer than I remembered but it is effectively the first hour of the Bike to Bestival route.

We set off in the same direction as the very first time. Very quickly we were on the beginning slope of the hill. A couple of minutes later we were at the top. I had had so much trouble with this short sharp hill only a few years earlier. But today it was over before it really began (to paraphrase Morrisey).

It's odd how perception of effort changes over time. Today's problem or challenge can quite easily become a daily achievement with enough hard work. 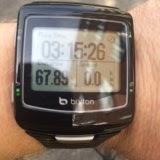 I noticed a similar effect with the Dunwich Dynamo. The first year it seemed incredibly far. A gargantuan achievement. This year it rained and I cycled the whole thing with road rash down one leg... and yet it seemed so much more manageable. I wonder if that's how I'll feel about triathlons by this time next year?
Posted by thelighterthief at 21:36 2 comments: