After missing last year's ride I was really excited to be doing the Dun Run for a 3rd time. Nathan was coming down to do it for the first time (although his chosen event is 24 hour mountain biking and I think this was a gentle training ride for him) and Dave and Rob would make four. This year I had a GPS and a light that I could see by. Totally prepared. 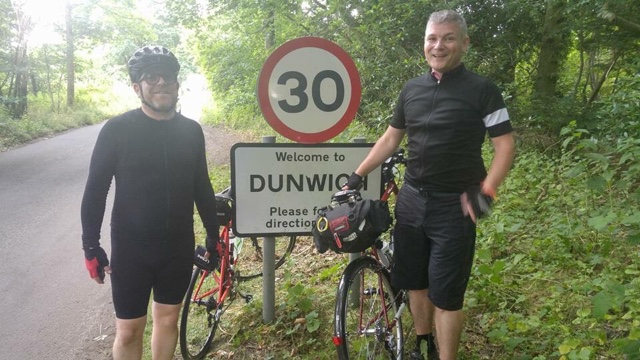 I spent a sweaty hour making sandwiches and snacks so I wouldn't need sugary snacks and picking an outfit for the weather. 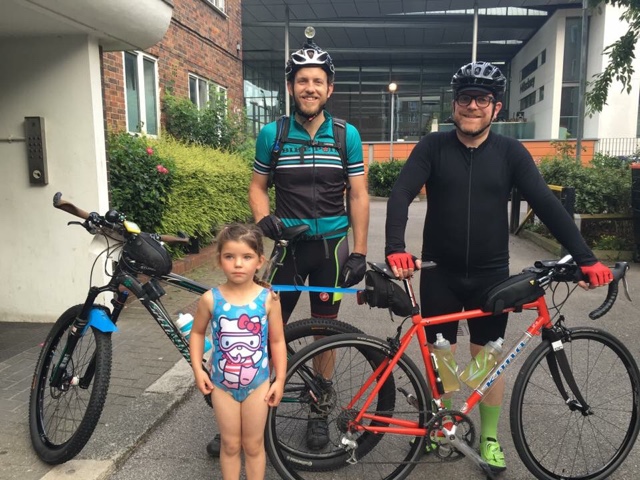 Dave messaged as him and Rob were setting off early to get some pubs in. We'd leave later and try to catch them up  at the last pub.
Leaving it to the last minute, Nathan and I prepped our bikes at about the time we'd decided we definitely needed to leave by.
Leaving London is always slow but as we came through Walthamstow we passed the point I crashed the last time I'd done this ride and started to pick up speed.
A two year period of training to keep up with my faster riding friends seemed to have paid off and we made a cracking pace. As the darkness descended I clicked on the lights I'd bought after a miserably poorly lit previous night ride and lo and behold I could see.
A brief stop in one of the villages with pubs and a second stop to eat a sandwich and we pressed on. A text from David suggested they were only a few miles ahead and were going to stop, not at the official halfway but at the Sudbury fire station.
By this point we kept seeing the same riders. In my case I passed them on the flat/downhills only to have them cruise past me on the uphill(ish) sections. I have to admit I'd never seen the point in doing this ride quickly but with decent lights it was a completely different ride.
Props to the fixie group wearing "fixed beers" tops as they seemed to be riding gears at the top end of my gear choices and became a regular fixture over the next couple of hours. One advantage of following guys with no brakes is that they won't stop too suddenly.
We had a coffee stop at the market by the lake, which was still dark. I realised at this point I was about 2 hours ahead of my time for previous rides.
At some point over the next hour I lost everyone I was riding with. Nathan off the front as he'd decided to 'time trial' the last 35 miles and the others I wasn't sure. 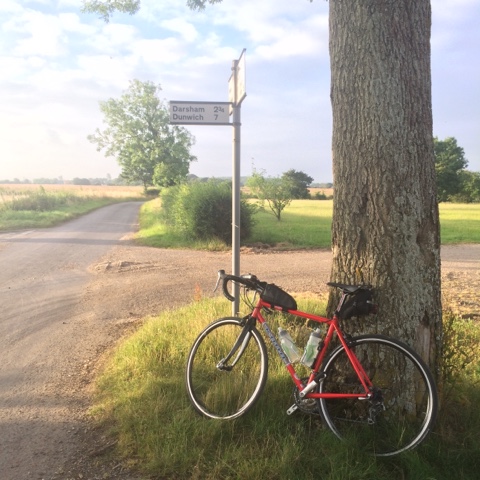 At 7 miles to go, in the now beautiful sunshine, I made a stop to take a couple of photos and shout 'left' to all the riders powering towards the turn to Dunwich. After a few minutes David arrived and we decided to wait for Rob. A few minutes later we got a text from Nathan. He was on the beach.
I love the last few miles of this route as, living in London, I rarely get to ride small roads like this.
A text from Rob to say he'd gone a different route. In the queue to book the coach back.
We got there in 7.5 hours of riding. We saw a 4 person multi storey bike, cycling clubs forcing their way through, vintage racers, the London Brompton riders, a child riding quicker than some adults, Mamils on bikes costing more than cars... Colleagues I didn't know cycled...
Queues.
More queues.
Breakfast. 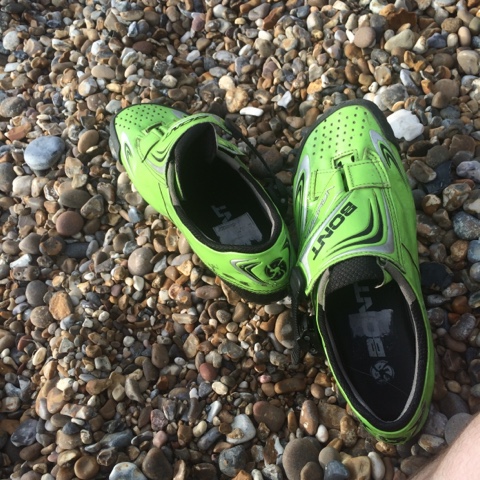 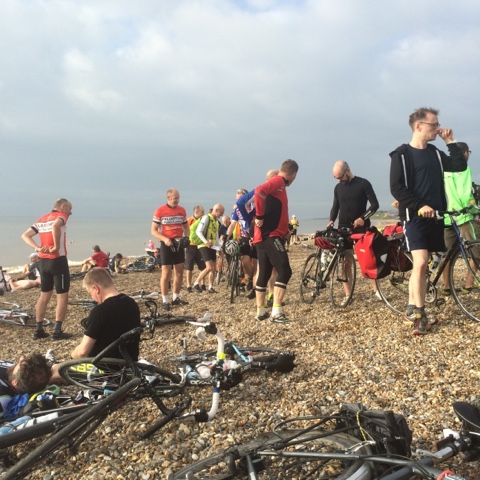 Long coach ride. Thank you to the category racers behind me for such entertaining conversations for me to eavesdrop on as I drifted in and out of sleep and a coach stop with a shop to descend on like a plague of Lycra clad locusts.
One final saga was that we were lucky enough to be on the coach that made it to Surrey Quays early. We pitched in with unloading and guarding/stacking a lorry full of bikes. In difficult circumstances yet another excellent job by southwark cyclists. Thank you for keeping it just organised enough to not be complicated, but disorganised enough to do whatever you want however you want to do it. 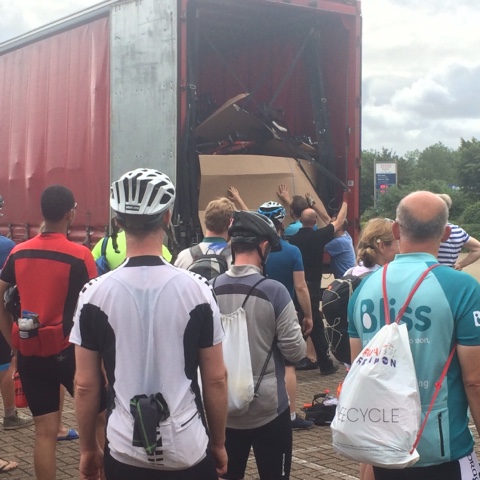 Plus points. Less gel wrappers all over the stops and road. Less massive cycling clubs pushing past. Excellent coach service and those weird veggie fried commas (cup-a-soup flavour) as part of the breakfast. Residents in deck chairs cheering us on.
Minus points. Just that it was almost impossible to get across London on our return.
Happy, happy days.
Posted by thelighterthief at 22:54 No comments:

Actually I might need to buy some new ones...

So I've actually only been out on the bike once* in February which is not what I planned at all. Although having only got in about 5 foul weather rides means my winter kit will last "forever"

I've had the usual sniffles and days when I should be riding but there are jobs to be done, but nothing to really get in the way. I've got decent enough kit that I arrive home frozen through but not delirious. I think in this instance it might have been nice to be going on club rides. Camaraderie and a group of fellow sufferers.

Another issue with winter riding is timing. In the summer you can get up at 6 or 7 and head off out for 80-90km and still be back by lunch. If it's pitch black at 8 o'clock then you need hi vis and lights. Likewise in the summer if it gets to 3 o'clock and I've finished whatever I'm doing I might head out for a ride. In winter you can start to feel the dark creeping in and an afternoon ride can suddenly become negotiating busy retail areas as they close down for the night.

I have this week, however, been finally allocated a locker in the work shower area so commuting in for a ride out after work as the weather picks up suddenly becomes a real possibility. I'll have to look into routes out of London from tower bridge...


*Once on the road bike. I've done errands and the odd commute on the Brompton

Posted by thelighterthief at 07:58 No comments: